'Trans Sheilas Are Not Sheilas' - Male Bodies In Female Sport

By me for @thetimes: "Scott Morrison ... has thrown caution to the wind. The Australian PM has declared that trans sheilas are not sheilas. Not in sport, anyway."https://t.co/wcUlOKkMrC

Trans athletes have no place in women’s sport 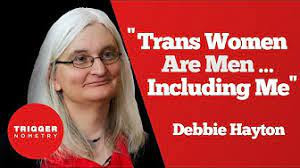 By Debbie Hayton - The Times

The febrile transgender debate tends to unite politicians only in their quest to obfuscate the truth. But at last we have a prime minister who is willing to be honest with the public. It’s not Boris Johnson — not yet, anyway — but Scott Morrison who has thrown caution to the wind. The Australian PM has declared that trans sheilas are not sheilas. Not in sport, anyway.

Sport focuses the mind because sport concerns the body, and male and female bodies are not the same. Last year in Tokyo, the female Olympic weightlifting competition was overshadowed by the presence of Laurel Hubbard, born male. Hubbard won nothing but the transgender swimmer Lia Thomas is smashing records in the pool, leaving women to compete for second place.

The future looks bleak for women in sport. Trying harder is not an option when your rival has the advantage of male puberty. Testosterone leaves a legacy that cannot be erased: larger muscle mass and stronger bones, not to mention a skeleton that never developed to carry children.

Claire Chandler, a Tasmanian senator, has been making this point valiantly. Her private member’s bill to amend the sex discrimination law would allow sporting bodies to do something they should never have been stopped from doing: operating single-sex sport on the basis of biological sex.

When put on the spot, Morrison was unequivocal: “I think it’s a terrific bill ... Claire is a champion for women’s sport and I think she’s been right to raise these issues in the way that she has. Well done, Claire.”

And well said, Morrison. The transgender thought police might not agree with me but trans rights need to be protected in the context of everyone’s rights. While we should be protected from less favourable treatment, we need to accept that nature has dealt us a more favourable hand when it comes to body strength.

So what should we do? If sport is for all then let’s maintain an open category that excludes nobody. What could be more inclusive than that? But crucially, keep a separate class for women in which they can compete as a sex. Because the problem is not about the inclusion of trans women in sport — that should be a given. What is wrong is the inclusion of male bodies in female sport. And, despite the protests from Equality Australia, this should apply to all ages: girls’ rights matter, too.

Maybe the next time the Labour MP Rosie Duffield is harassed for her views on trans women, Sir Keir Starmer might follow Morrison’s example. Female politicians standing up for the rights of women and girls should be applauded, not ignored.

Debbie Hayton is a transgender teacher and journalist