Showing posts from September, 2019
Show All

How Do You Know When Donald Trump Is Lying?

Here's Fox News' Chris Wallace saying that "the spinning that's been done by the president's defenders over the last 24 hours since this very damaging whistleblower complaint came out ... [is] not surprising but it is astonishing and I think deeply misleading." 👀 pic.twitter.com/rKfQgGMkLF — Aaron Rupar (@atrupar) September 27, 2019 Fox News presenter Chris Wallace doesn't buy Donald Trump's lies over his efforts to use a foreign government to dig up dirt on a political rival.   How Do You Know When Donald Trump is Lying? (17/09/19) George Conway @gtconway3d Is this Fake News, @ realDonaldTrump ? https:// twitter.com/foxandfriends/ status/1024260888532905984  … FOX & friends ✔ @foxandfriends President Trump says a meeting with Iran’s President Rouhani could happen with “no preconditions.” Your thoughts? 16.3K 02:26 - 16 Sep 2019 Twitter Ads information and privacy
Read more 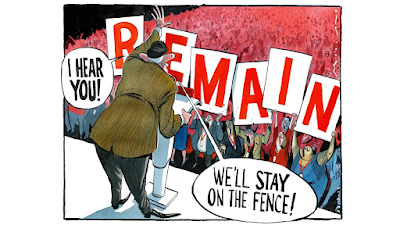 Morten Morland got the outcome of last week's Labour Party conference spot on with his cartoon in The Sunday Times. Despite the fact that the vast majority of Labour party members are pro-Remain Jeremy Corbyn has decided not to adopt a position on Brexit ahead of the next general election. Brexit is, of course, the biggest single issue facing the country in modern times, yet incredibly Jeremy Corbyn seems to think that leadership is about sitting on the fence.   Corbyn's No Leader (13/06/18) Jeremy Corbyn is a firm believer in Labour party democracy - except when it doesn't suit his purpose or is ideological 'leftist' views. Because while the great majority of Labour party members support a second referendum on the final terms of Brexit and remaining within the EU's Customs Union/Single Market - Jezza  says he knows better. So while Jeremy babbles on about negotiating a deal with the EU which holds on to all the benefits of the Single Market
Read more
More posts