Showing posts from June, 2017
Show All

Here's the letter from the GMB's Gary Smith which I mentioned briefly on the blog site yesterday.  GS/LHC 29th June 2017 Dear GMB Member, The legal action around Pay Protection / Equal Pay has been long and drawn out. The whole situation with Equal Pay is complex and it is further complicated by the appeal over the Glasgow City Council job evaluation process. As a union we have tried to communicate as best we can on the union's position on the cases. As you know private solicitors are also involved in the cases against Glasgow City Council. These solicitors are driven by profit. They make money from the claimants they represent. The private solicitors will take money from any settlement. That is not the case with members of GMB Scotland. Every penny GMB Scotland secures for you through our solicitors Thompsons will go to you as an individual. We believe Thompsons are the preeminent Equal Pay lawyers in Scotland that's why we have appointed them to represent your i
Read more

June 30, 2017
My understanding of Labour party policy on Brexit is that its leader firmly support the UK leaving the European Union (EU), so long as the country continues to enjoy all the benefits of being a member of the EU. Which sounds like the political equivalent of being a little bit pregnant, if you ask me - it's the same as having your slice of cake and eating it at the same time. In the first test of his leadership since the general election, Jeremy Corbyn yesterday ordered Labour MPs to abstain over a vote in the House of Commons to stay within the Single Market and the Customs Union, both of which have major implications for jobs and future growth in the UK economy. Three shadow ministers (Ruth Cadbury, Andy Slaughter and Catherine West), were sacked for defying their leader's order and and a fourth (Daniel Zeichner) resigned before he could be shown the door. UK politics has an 'Alice in Wonderland' feel to it these days with arch-rebel Jeremy Corbyn demanding l
Read more

Donald Trump's election promises are proving to be as elusive finding the perfect golf swing - although in the case of the latter it's certainly not for the want of trying.
Read more

A kind reader has sent me a copy of a letter on the fight for equal pay in Glasgow City Council from the GMB regional secretary, Gary Smith.   I haven't laughed so much in a long time, so tune in again tomorrow to read my thoughts on what Gary has to say.
Read more

A Question of Leadership

The big political news on Twitter right now is that Jeremy Corbyn is to whip Labour MPs into 'abstaining' on an amendment which would commit to membership of the EU's single market. Now given that the majority of Labour supporters voted to remain in the Europe, along with the majority of Scots and a majority of young voters, you would think Jezza would set aside his personal hostility towards the EU and support this amendment from one of his own backbenchers, Labour MP Chuka Umanna. Because an awful lot of water has flowed under the bridge since the EU referendum in June 2016 which never specifically asked voters for their views on the pros and cons of leaving the Single Market and/or the Customs Union.
Read more

Lots of readers in Glasgow have been in touch to ask for more information about the basis of people's  equal  pay claims and the backdating arrangements that may apply . Now the Court of Session has effectively ruled that the pay of the women claimants in Glasgow City Council should have been brought into line with that of their male comparators and that, subsequently, the women should have been provided with the same pay protection arrangements as the men - see post below dated 31 May 2017. The big question is how long these pay protections arrangements lasted because the trade unions, of course, threatened to go on strike if the higher (bonus related) pay of the was not maintained going forward from 2006/07 - the so-called Employee Development Commitment (EDC). So if the male workers who benefited from the EDC still enjoy much higher pay that the women claimants in 2017, then it can obviously be argued that the women workers deserve equal treatment and that's c
Read more

Lots of readers have been in touch to ask for advice on the following hot topic:  "Can I pursue a new equal pay claim with Action 4 Equality Scotland?" Now the answer to this question is 'Yes', by and large, for the reasons explained below, but please note there are different categories of potential new claimants. Can existing council employees raise new claims? Existing Glasgow employees who have never before registered a claim can do so now because the recent Court of Session decision has thrown a big spanner into the works of the City Council's pay protection arrangements. As regular readers know, the Court has already decided that the pay protection scheme (PPS) should have been extended to the claimants' jobs as well as the jobs of the former bonus earning (male) comparators.   The PPS should have ended after three years, but the judges also noted that the City Council's Employee Development Commitment (EDC) gave further protection to t
Read more 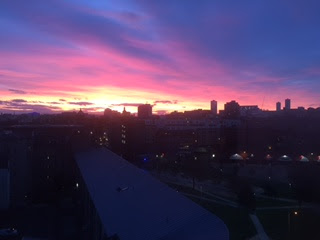 Last night's weather forecast for Glasgow predicted a cloudy end to the evening and a very rainy start to the day - neither of which proved to be true as this photo shows.
Read more

Lots of readers from Glasgow have been in touch to ask for more information on the basis of their equal pay claims against the City Council and the backdating arrangements that may apply when these claims are settled. I'll have much more to say on the subject tomorrow - so watch this space!
Read more

A number of A4ES clients have been in touch to say that they have received another unsolicited letter from the GMB union, via something called UnionLine, enclosing an ET1 form which is blank except for the City Council's address.  As I've said previously, there is no need for A4ES clients to do anything about these letters except perhaps to thrown them in the bin.  For reasons known only to itself, the GMB union keeps writing to long-standing clients whom A4ES has been representing for years, in many cases, and some people understandably get anxious when they receive this kind of correspondence right out of the blue.  A4ES will be in touch directly with everyone who has received one of these 'nuisance' letters and will deal with any issues that need to be clarified with the Employment Tribunals.        Glasgow Equal Pay News (25/06/17) The GMB in Glasgow is proving to be a bit of a nuisance because the union keeps sending unsolicited letters to A4ES cl
Read more
More posts