Showing posts from September, 2013
Show All

September 30, 2013
In recent weeks just about everybody and their uncle has had advice for the Labour leader - Ed Miliband - in response to his poor showing in the opinion polls which suggest that less than 1 in 5 voters can envisage Ed as Prime Minister of the UK.  One of the suggestions doing the rounds is that Labour should bring its 'big beasts' back into front-line politics - well known faces like Alistair Darling, John Reid, and David Blunkett's names have all been mentioned.  Now to my mind that would be a backward step, but that doesn't mean that Ed should listen to what the 'old guard' has to say - for example here's a strong yet sensible point of view on the need for Labour to challenge the 'benefits culture' which Chris Mullin felt strongly enough about - to put pen to paper, so to speak - back in 1999. Yet all these years later Labour is still struggling with the need to come up with a sensible policy on welfare reform - having neglected t
Read more

September 30, 2013
If you ever wondered why the Greek economy was in need of a big bail-out from the European Union - here's a story from the BBC web site which helps to explain how public spending in certain areas was allowed to escalate out of control. Now awarding civil servants an extra six days holiday a year just for using a computer sounds completely bonkers - as does the practice of paying employees a bonus just for turning up for work. But I remember a somewhat similar agreement being struck in Scotland not that long ago - by Edinburgh District Council in the early 1990s, if I recall correctly - under which the Council awarded an extra 3 days annual leave as part of a new local agreement on the use of 'new technology'. The local agreement applied only to 'white collar' workers - not 'blue collar' or manual workers and the unions representing these groups of staff (NUPE, GMB and TGWU) all regarded the move as a complete waste of money - as well as unfair on thei
Read more

I was struck by the lack of moral outrage in parts of the footballing world after the Rangers player - Ian Black - was fined £7,500 and handed a 10 match suspension (7 of which are suspended) by the Scottish Football Association (SFA). The player admitted a long history of betting on football games - despite the fact that the SFA  operates a zero tolerance approach to gambling - which restricts players from betting on any football match anywhere in the world. So it was no surprise that Ian Black was handed a hefty fine and ban after admitting charges of betting on three football matches on his then-registered club not to win - and betting on a further 10 football matches that involved his own club. The player's bets on a  further 147 football matches resulted in Black receiving a ' warning' about his future conduct. Football in Scotland attracts more than its fair share of 'head cases' - and it needs a 'laddish' gambling culture getting a hold of th
Read more

September 30, 2013
I read this article which appeared in the Times the other day - written by a chap called Martin Bright who used to be the Political Editor of the New Statesman, a vaguely left wing, Labour supporting magazine. I have to say it had the ring of truth about it - because the factionalised side of the Labour Party is a very nasty party, quite capable of victimising people in this way - as the Damian McBride affair showed only too well. Moral compass, my arse! I lost my job because I stood up to the Brownites Damian Bride’s memoir brought back memories of how I was forced out of the New Statesman By Martin Bright I read Damian McBride’s account of his time as Gordon Brown’s political hitman with a sense of horror and terrible recognition. As Political Editor of the New Statesman, known at the time as the house journal of Labour’s Brownite faction, I had a ringside seat during one of the most brutal and poisonous periods of recent political history. During the Blair Government I en
Read more 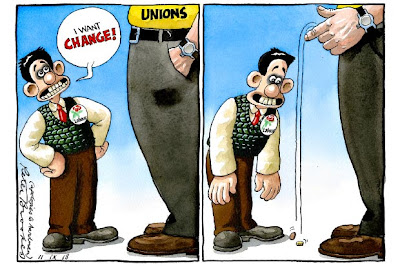 If this BBC report is anything to go by, the Labour Party leader - Ed Miliband - already has his answer from the trade unions - 'You change if you want to, but we plan to have our cake and eat it at the same time'. Because the inevitable logic of any ' opting in' system for party donations from ordinary trade union members - is a move to One Member One Vote (OMOV) which can only result in one thing - a big reduction in the level of influence wielded by Britain's union bosses (Bubs) when it comes to internal Labour Party affairs.  But judging by Paul Kenny's comments the Bubs are not going to give up without a fight - and to my mind that's all too predictable because too many of them like to act like 'armchair politicians' instead of standing up for the interests of their members.     Labour conference: Union warnings to Miliband on reforms Len McCluskey's Unite union is Labour's biggest financial backer Union leaders have
Read more

I have been looking through some of my previous FOI requests to South Lanarkshire Council   and do you know what jumped out? The fact that many of these were 'answered' - if that's the correct word - by none other than Linda Hardie, the Council's former director of finance.  Now Linda Hardie left South Lanarkshire's employment under very controversial circumstances - and probably not of her own making - given what I've learned about the Council in recent years.  So, wouldn't it be wonderful if Linda now came forward - and ignored any unlawful 'gagging clauses' surrounding her departure - to become a whistleblower in relation to equal pay and Freedom of Information.  Gagging Clauses (15 March 2013) In recent weeks there has been much comment about the NHS and the practice of senior officials being shown the door - often in controversial circumstances - but with hugely generous exit packages. More often than not these publi
Read more

Malcolm Rifkind works himself up into a state of high dudgeon in this article which appeared in the Guardian recently. The subject of Rifkind's wrath - which is both powerful and humorous - is Sir Simon Jenkins,   a regular columnist in the Guardian newspaper. For me it's Rifkind who has the better of the argument - but you can decide for yourself since the opinions of both knight os the realm are set out below.    What rubbish, Sir Simon! Our intelligence agencies are not outside the law By Malcolm Rifkind  Real issues arise out of the Snowden affair, but British security laws keep us safe without intruding on citizens' freedoms Edward Snowden in Moscow. 'It is not surprising that there has been more debate about Snowden and Prism in the United States than in the UK.' Photograph: Itar-Tass I usually am impressed by Simon Jenkins, but his polemic in today's Guardian on the Edward Snowden affair was well below par and full of howlers. If his
Read more
More posts