Showing posts from September, 2014
Show All

I read somewhere during the Scottish referendum campaign that government officials in China were talking great delight in the level of support for independence in the opinion polls, not because of their great love for democracy, but as payback for the long years of colonial rule by the British Empire. Now the good thing about Scotland's independence referendum   whether people voted Yes or No is that it was a magnificent exercise in people power, in self-determination, and everyone who took part deserves huge credit, even David Cameron and the Coalition Government at Westminster which agreed to put the issue to the test in the first place.    Compare   events in Scotland with the scenes in Hong Kong over the weekend where the Chinese Government is trying to gerrymander the election of Hong Kong's next chief executive. Seems like democracy is coming to Hong Kong whether the Chinese Communist Party (CCP) likes it or not, which would be a good thing if you ask me, si
Read more

I came across this post from the blog site archive which I wrote over 18 months ago on the key issue confronting the trial of Oscar Pistorius. Looking back I would not change a single word although as the Steenkamp family awaits the celebrity athlete returning to court to be sentenced for culpable homicide it much feel to them that Pistorius has got away with murder. Culpable Homicide (27 February 2013) I'm no expert on South African law - but I suspect the term 'culpable homicide' has the same broad meaning the world over. To me it means that someone accused of culpable homicide has caused another person's death - but has done so without malice or intent. Now this a sensible aspect of the law although it is subject to abuse - since it is quite common for criminals to argue to argue that their actions were unintentional - that the deceased person  'ran on to the knife', for example. Or that they fought back against their and died in
Read more

Ed Miliband's speech to the Labour Party conference is going to be lampooned from here to the general election, and rightly so I think because it was truly terrible from a man who has been a professional politician for  years. In case you missed it the Telegraph's sketch writer, Michael Deacon, captures the essence of the speech here and as I said in a recent post to the blog site, Ed came across more like Forrest Gump than a potential prime minister.    All of which reminded me of a hit American TV show from the 1950s and 60s 'Mister Ed' - the star of which was a talking horse (Mister Ed) and if I remember correctly, featured a special appearance by Clint Eastwood in one episode. Sketch: A young man called Ed Celebrating Ed Miliband's unforgettable speech at the Labour Party conference 2014 – in the style of Ed Miliband's unforgettable speech at the Labour Party conference 2014. By Michael Deacon  - The Telegraph Friends, today I want to tel
Read more

I hadn't really thought about lorry drivers as a group of workers who would have a holiday back pay claim, but there's been an enquiry from a big distribution centre just off the M8 and it seems, indeed, as if these workers do have a case. Because they regularly work overtime hours and are often on the road the weekend as well, which is obvious when you think about it, and apparently these additional pay elements are not included when the drivers take their annual leave. So it looks as if they are another   significant group and as word begins to spread and no doubt others will follow.    Simple HBPC Test  Here's a simple test to help discover if you have a holiday backpay claim. T ake your entire wages for 3 months without holiday pay and divide by 3 to give you your average pay for those 3 months. Then compare this average pay with your pay in the month you were on paid leave.  If your holiday pay is less than your average pay, then it is less
Read more

The holiday pay campaign keeps growing every day with different groups and categories of workers getting in touch to ask if they have a valid claim. For example, a call came into the HBPC office the other day from a group of call centre staff in North  Lanarkshire and information was sent out to them the same day.  Apparently more than 1,000 staff work in the call centre, so there is huge potential out there as the word spreads among existing Action 4 Equality Scotland (A4ES) clients and completely new clients in other areas in the private sector. So keep spreading the word - the greatest recommendation anyone can make is a personal one and on that basis the track record of A4ES speaks for itself. Simple HBPC Test  Here's a simple test to help discover if you have a holiday backpay claim. T ake your entire wages for 3 months without holiday pay and divide by 3 to give you your average pay for those 3 months. Then compare this average pay with your pay in the m
Read more

Letters are going out to A4ES clients in Glasgow this week regarding holiday pay claims and I've had lots of enquiries already from people in Glasgow asking whether they might have a claim. Just like any other part of Scotland, the issue comes down to whether you regularly earn 'additions' to your basic pay. So lots of Home Carers employed by Cordia these days work overtime and do shifts - so if these payments have not been included when people take holidays and annual leave, then it's very likely you have a valid claim. What kind of jobs are involved?  All kinds of public sector jobs potentially, both male and female dominated jobs, as well as workers in the private sector - people who receive various additions and 'top ups' to their pay via overtime, shift allowances etc.  Here's a simple test from the blog site that can help you to work things out.   Simple HBPC Test (12 September 2014) Here's a simple test to help discover if yo
Read more

Enquiries about Holiday BackPay Claims keep rolling in from North Lanarkshire after a recent mail shot to existing A4ES clients. A lot of people have the same question - "Is this an entirely new claim or is it connected with my existing A4ES equal pay claim?"  And the answer is that it's an entirely separate claim. So even if you are an existing A4ES client, you still need to submit a new claim because the issues involved are quite different to equal pay. Here's a simple test which explains what's involved, but if you're in any doubt contact the HBPC office by email or the telephone numbers below. Simple HBPC Test Here's a simple test to help discover if you have a holiday backpay claim. T ake your entire wages for 3 months without holiday pay and divide by 3 to give you your average pay for those 3 months. Then compare this average pay with your pay in the month you were on paid leave.  If your holiday pay is less than your average
Read more

I still get email enquiries every day asking if there is a connection is between equal pay and Holiday BackPay Claims. The straight answer is No, not a direct connection at least, because equal pay is all about gender differences - the difference in pay between male and female jobs. Whereas Holiday BackPay Claims is solely about whether workers, male and female, received their normal pay during periods of annual leave, going back several years potentially. So workers in the public sector who regularly receive 'additions' to pay such as overtime or shift payments may well have a claim and this is true across the public and private sectors. In Scottish councils, for example, this could apply to lots of traditional male jobs who never had a claim in respect of equal pay - refuse workers, gardeners and suchlike - jobs which have often attracted overtime and shift work. But Holiday BackPay Claims are also likely to apply to many female dominated jobs such as Home Carers who
Read more 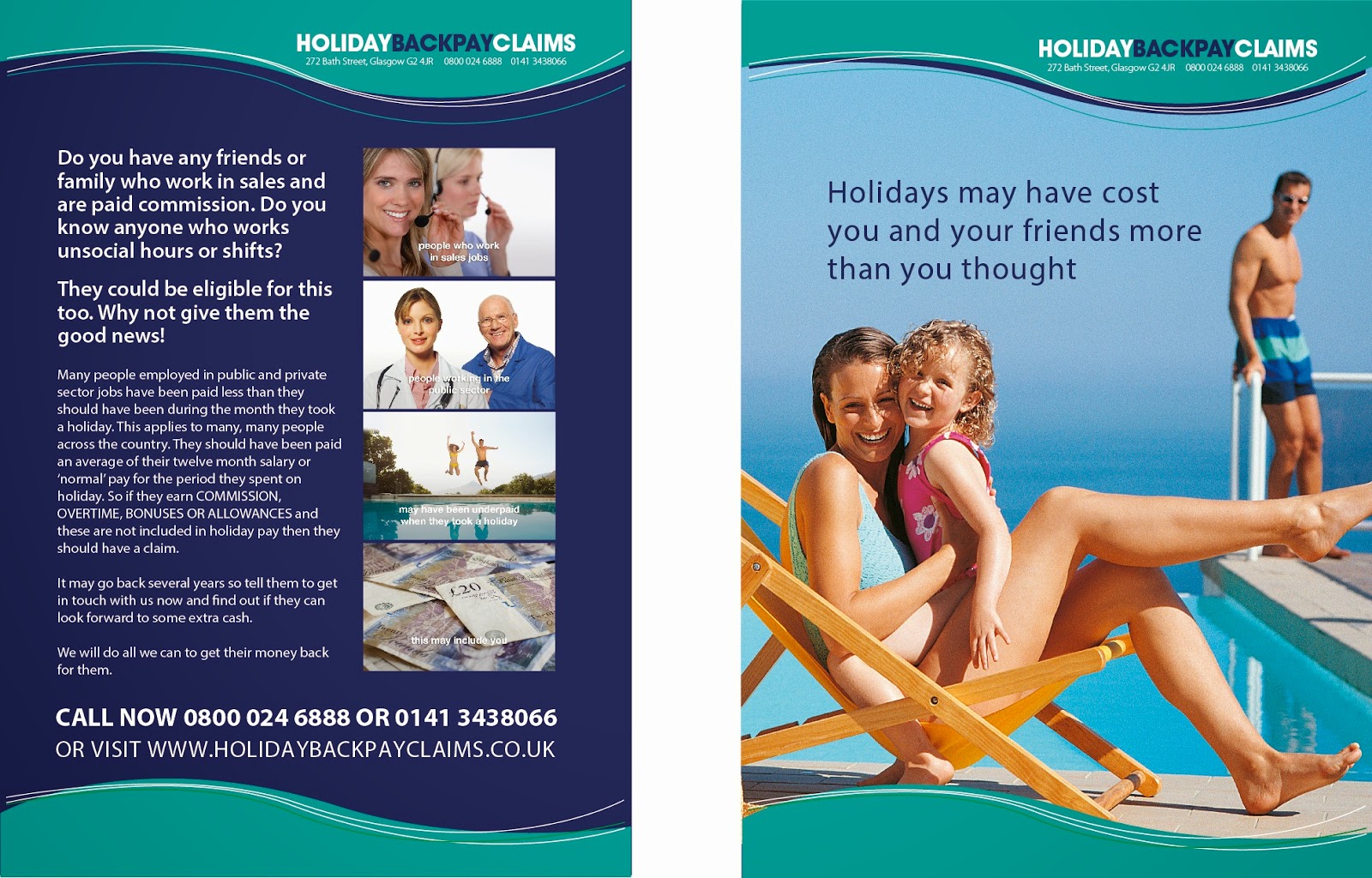 I've received a number of emails asking if the holiday backpay campaign applies only to council workers. The answer is No.  Because employees right across the public sector are likely to have a claim, if their holiday pay was less than their 'normal' pay throughout the rest of the year.  So workers in the private sector may well have a claim - in large and small companies - as well as public sector employees in the NHS, universities, colleges and local councils.     The HBPC web site is now up and running which people can visit and find out more information for themselves at: http://www.holidaybackpayclaims.co.uk   For more information you can also call 0800 024 6888 or 0141 343 8066. So start spreading the word to fellow workers, friends and families and if people have any queries they can also drop me a note at: markirvine@compuserve.com Posted by  Mark Irvine   at  01:49
Read more
More posts