I do love it when politicians get on their high horse over other people's behaviour while turning a blind eye to events closer to home.

The recent furore over Dominic Cummings is a case in point and it reminded me of this story in The Herald which reported on the behaviour of two Glasgow SNP councillors during 'lockdown'.

Lockdown in Scotland began on Tuesday 24 March 2020 and the next day Cllr Wilson was quoted in The National, from America where he was 'stranded', which reported that Cllr Wilson and his family would be self-isolating when they got back to Scotland.

Yet on the 3rd April 2020 The Herald reported that Cllr Wilson had left the family home in Cardonald to be with his party  colleague on the opposite side of the city.

Now I could be wrong, but I don't remember Glasgow's  politicians calling for Cllr Alex Wilson and Cllr Mandy Morgan to resign their seats on Glasgow City Council.

The wife of an SNP councillor launched a brutal attack on her 'cheating' husband after he is alleged to have left her for another party councillor.

Glasgow Cardonald Councillor Alex Wilson is understood to have broken the news to his wife last night, telling Pamela Wilson he was leaving her for Glasgow North East representative Mandy Morgan.

Devastated Mrs Wilson branded the politician's official Facebook page with 'adulterer' and 'cheater' slogans last night, and wrote: "And just like that, 30 years of a relationship is over as Alex Wilson walks out to start a new life with his tart Councillor Mandy Morgan leaving 2 heartbroken kids behind him to go play happy families with her."

Mrs Wilson told The Herald: "I am absolutely devastated. This came completely out of the blue. I don't know how I'll cope financially or how I'll keep a roof over the kids heads.

"He told me he was leaving me to go live with her as they've been planning it since January. We've been together since I was 13, he was 20. It's our 20th wedding anniversary this August."

The couple have two teenage children and just returned from a landmark family holiday to celebrate the councillor's 50th birthday. 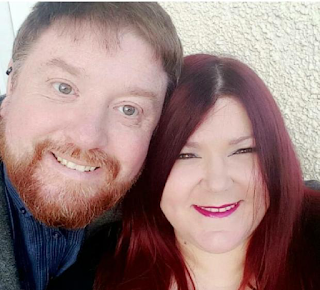 Councillor Wilson and his wife Pam in happier times

Councillor Wilson last week told the media he was concerned about his family being stranded in Orlando due to the coronavirus crisis, and said they would all be self-isolating on their return.

Mrs Wilson said: "I'm now saddled with a £5,000 loan for his birthday holiday, a huge mortgage and the usual bills. I need to find another job too which won't be easy in this climate as I can't be out every night and leave the kids at home.

"I also bought him a French Bulldog puppy in November as part of his birthday and to cheer him up as he had just lost his dad.

"Alex always wanted a frenchie. He walked out and left Stanley behind The Herald has contacted Councillors Wilson and Morgan, and has received no reply.

However a source close to Cllrs Wilson and Morgan said: “This is a personal matter where considerable pain and hurt has been caused to a number of people.

"They will all need time and space to work this through. They’ve all got to make sure the interests of the children who are involved are protected.”

Scottish councillor stuck in the US tells of family’s fears

Alex Wilson with his daughter, Cara

A SCOTTISH family desperate to get home from the US have told of their coronavirus travel fears.

Alex Wilson – a Glasgow councillor – travelled to the US with wife Pamela and children Adam and Cara on a landmark break three weeks ago.

The Orlando trip was organised to celebrate Alex’s 50th birthday and for the first few days all attractions were operating as normal.

However, major theme parks and other attractions began closing shortly after their arrival as Covid-19 cases in the US spiked.

As of yesterday afternoon, there were 48,000 known cases and at least 600 deaths.

Now the family are “checking flight information every hour” after their carrier British Airways cancelled their flight home, leaving them to reorganise their trans-Atlantic travel. Currently booked onto a succession of three flights home, the family fears further delays could put them at risk of contracting the virus.

Alex told The National: “We got here before it all really started taking off and we thought it would be okay. But it has really ramped up and, I think, taken a lot of people by surprise in Scotland and in the US.

“I couldn’t believe how quickly it’s been going up.”

The Foreign and Commonwealth Office has advised UK citizens not to undertake any non-essential travel for the next 30 days and to return immediately if commercial flights are still available.

The SNP councillor said: “We have had no symptoms and we haven’t come across anyone who has. We have a flight to Miami, another to Heathrow and another one back up to Scotland and of course we’ll isolate ourselves when we get back.

“But we’ve had no real advice for travellers and we don’t really know what we are coming back to.

“Our flights have been changing right, left and centre.

“The first flight is quite quiet but the main one back to the UK is really busy. They’re repatriating a lot of people.

“Obviously the air on planes is recirculated and there may be people on there who might not have shown symptoms yet, so we are worried.

“It’s really worrying for us.”

Since the shut-downs began, the family have spent most of their time in their rented villa, using local supermarkets for supplies. There have been the same runs there on essential items as have been seen in the UK, with shortages of toilet roll and other sundries.

READ MORE: Wetherspoons boss tells staff to go work at Tesco after leaving them with no pay

Alex described an air of tension amongst the local population, many of whom work in hospitality and other low-paying industries.


He said: “The lines in Wal-Mart have been massive, there are loads and loads of people wearing masks and gloves.

“Every time you go to a petrol station or use a shopping trolley, there’s a staff member who’ll come along with a spray bottle of disinfectant and clean down everything you’ve been touching. They are really on the ball and they are on top of it but when we first got here there were only 1700 cases in the States, so even despite all the effort they’re making it is still spreading.

“Restaurant staff have been really worried about their jobs. They only make $5 (£4.26) an hour and they rely on tips, so when customer numbers started to go down that really affected them.

“Some were saying they’d rather be paid off because they would make more on social security than they were taking home in their pay.”

Disney and Universal Studios parks have all closed in an unprecedented move, which has also extended to attractions elsewhere in the US.

St Patrick’s Day parades were called off in several cities, while the NBA basketball and NHL hockey leagues have scrapped their seasons.
Posted by Mark Irvine at 01:29