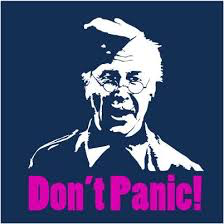 Sweden has not followed other European countries by imposing a strict 'lockdown' during the Coronavirus epidemic.

Instead Swedes have placed the emphasis on observing good personal hygiene (frequent hand washing etc) and safe social distancing to stop the spread of Covid-19.

Sweden has twice the population of Scotland, but has just as good if not a better track record in preventing its citizens from dying from the virus.

Norway (5.4 million) and Finland (5.5 million) have very  similar populations to Scotland) and have done better still, but read more about the the Swedish experience via the link below to The Sunday Times.

“Other countries? Maybe they needed a bit more ice in their stomach” 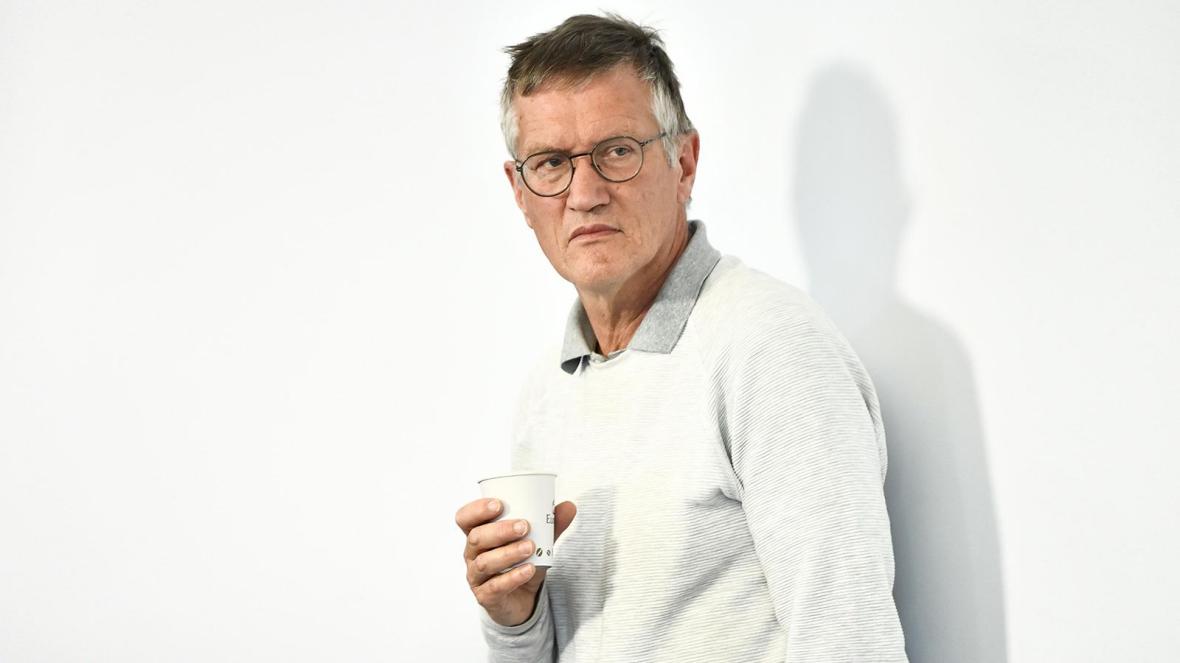 
By Louise Callaghan - The Sunday Times

Democratic Republic of Congo, 1995. An ebola outbreak has just been declared. Anders Tegnell, a Swedish epidemiologist, is sent to Kinshasa to help with the response. Panic is widespread, the relief operation is a mess, people are dying. No one knows what they’re meant to do, and competing directives from different agencies have added to the confusion. Sound familiar?

The outbreak was suppressed and Tegnell went home to resume his very ordinary, office-based life in Stockholm, forming Sweden’s public health policy. But he had learnt an important lesson: when crisis strikes, people die if officials do not communicate properly.

Twenty-five years later, Tegnell is a key figure in another pandemic. At 64, he is directing a response to the coronavirus in Sweden that has earned him devotion and rancour across the world. This is because, unlike just about everywhere else, Sweden has held back from enforcing a full lockdown, instead relying on people to observe social distancing and stay home if they’re sick. Schools have remained open for under-16s, while colleges and universities have been closed. Gatherings of more than 50 people are banned, but many restaurants and bars are open — albeit with social-distancing measures in place (you can be served at a table, but not at the bar). 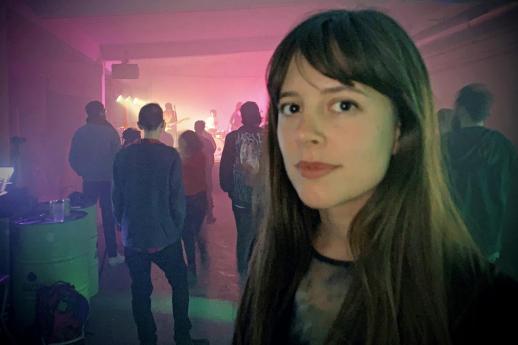 Callaghan on the night she “joined the herd” and caught Covid-19 at a gig in Malmo, Sweden

This approach, Tegnell believes, will allow the virus to spread slowly through the healthy population — I am Swedish and experienced this first-hand when I caught corona at a punk gig in Malmo. This should cause immunity to rise, thereby protecting Sweden from a second, potentially more lethal, wave of infection.

It has not been quite that simple. Almost 4,000 people have died in Sweden, far more than in neighbouring countries (both in total and on a per capita basis). During one week in May, deaths per capita overtook every other country in Europe, according to Our World in Data, an online research site based in Oxford. By the end of April, only 7.3% of people in Stockholm had developed antibodies needed to fight the disease, but Swedish health officials argue that this number reflects the situation from several weeks ago, inferring that the level has now risen. They believe that their approach will work in the long run. As transmission rates fall, a return to something like normality might be in sight. The death rate is declining and, overall, Sweden has had fewer deaths per capita than the UK, Italy and France, all of which enforced lockdowns. For other countries, they suggest, the worst may be yet to come. Should those countries have acted like Sweden?

“I don’t know,” Tegnell says. “They did the necessary things at the stage where they were, when they saw things coming apart. But maybe they should have had a bit more of, what we say in Swedish, ice in their stomach.”

In these weird, uncertain times, having ice in your stomach can put you on a fine line between being bold and heartless. Yet as politicians falter in the face of a wildly complicated and deadly challenge, scientists have become celebrities: their love lives make front-page news, they spark adoration and hate, and their feuds are closely examined. Tegnell himself has been fetishised by large chunks of the Swedish population. A few weeks ago at a dinner party in Stockholm I witnessed a debate rage over whether Tegnell, or his 46-year-old deputy — also called Anders — was hotter (almost everyone said Tegnell). On his birthday there were toasts to him around the country.

Despite the high death toll, surveys have found that Swedes aren’t particularly afraid of catching Covid-19. Perhaps some of that is down to Tegnell’s strategy of communicating calm, accountable stability rather than making statements about overcoming adversity (Italy) or pushing metaphors about war (the UK). “In Sweden we know that trying to scare people is not a good way forward when you want something,” he says. “You need to inform people and give them a good background to make their own informed choices.”

We Swedes pay high taxes because we believe the state will protect us. Given the widespread trust in the state, is there a worry that people might just back him whatever he is doing? “No,” he groans. “People are not stupid. They trust us because we give a good explanation of why we’re doing things.” 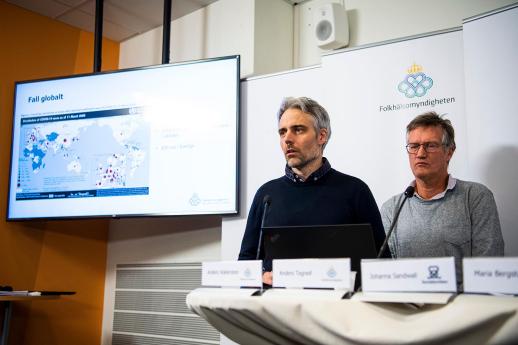 Even so, for Tegnell and his colleagues, the stakes are appallingly high: should they fail, thousands more could die and one of the cornerstones of the national character could be destroyed. “Trust is something that’s very easy to lose and very, very difficult to rebuild, so it’s important for me and our agency to keep that,” he says. “But you need to do it by being incredibly transparent, admitting your mistakes and admitting when you have made the wrong choices very quickly and openly, and move on.”

Mistakes, of course, have been made — mistakes that have cost lives. About half of Sweden’s fatalities have been vulnerable older people living in elderly care homes that arguably could have been better insulated from the virus. Does he feel responsible? He sighs and sounds genuinely upset when he answers. “I’ve lost — we’ve all lost — people in our older generation and this is a terrible thing that happened. And we are really trying to do our best so that this will happen to as few people as possible.”

Despite this he remains convinced that the public health agency is doing the right thing. Yet how did we even end up here? Sweden is better known for its nanny state than for its commitment to personal freedoms. Almost all our alcohol, for instance, is sold by state depots during tightly regulated hours. So when did we become libertarians? The Swedish coronavirus policy is easier to understand once you realise that this was the plan all along. Norway, the Netherlands and — for those with long memories — the UK all had contingency plans similar to what Sweden is doing today. Why, then, did they switch to harsh lockdowns? Did they panic?

“To a certain extent I think they did,” Tegnell says. Was he tempted to follow them, when they started changing their strategies? “Not drastically like that. We continually look at how we can adapt and get better. But this sort of total turnaround, we’ve never been close to that.” Last week, Stefan Lofven, the prime minister, expressed concern that Sweden was being cast as the odd one out, describing the fight against Covid-19 as “a marathon”. He argued that his country’s approach will come good over the long term and that it will suffer less, economically and socially, than other countries. As the death toll continues to rise, so the pressure to change course increases. Last month, 22 researchers accused health authorities of aiming to achieve herd immunity without admitting it. They called the policy dangerous and unrealistic and called for a shift in policy.

But Tegnell seems to take pride in rejecting measures he thinks aren’t beneficial, even though everyone else is adopting them. Take masks, for instance. While many other countries have made them mandatory in public spaces, Tegnell says there is not enough proof that they are effective outside non-clinical environments. But why not do it anyway, if there’s a chance it could save lives?

“We don’t think [that approach] could save lives. It actually could cause a loss of life if it’s not used in the right way,” he says. “We’re talking about risks that these masks will not be available for healthcare because they’ll disappear. Furthermore, in Sweden, we say if you’re ill, stay home, isolate yourself, don’t infect anybody else. If we’re telling people to use a face mask, they would put one on and then they would go out and definitely infect more people than if they had stayed home and isolated themselves.”

Could the Swedish approach have worked elsewhere? Clearly the country is atypical: lots of cash, a small population spread out over a large area, a well-developed health system and a good baseline of public health. 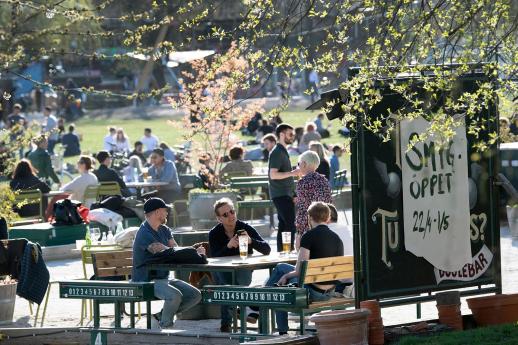 Bars and restaurants in the country have remained open - AFP

“There are parts of the Swedish model that could work in many countries. If you look at a lot of the exit strategies that have developed, now it looks like a lot of countries are pretty much closer to the Swedish models,” he says. “Because you need to have some kind of softer restrictions. You can’t go on having schools closed. That does terrible things to children. And you can’t go on having borders closed, that does terrible things to the economy. So then you try to find another way of keeping social distancing in place.”

How does he think the curve would have looked in the UK without a lockdown? Would the rate of infection have been any different?

“At the end of this we might look at each other and realise, no, whatever we did didn’t make much of a difference,” he says. “And the Swedish model or the British model or the Dutch model, all of them in the end they just took a shorter or longer time, and the effects on society and economy was different. But the health consequences might be very similar in the end.”

Whatever happens, nothing will ever be the same for the scientists who have been thrust into the limelight by this pandemic. Professor Neil Ferguson of Imperial College, whom Tegnell knows a little, has been splashed over the front pages of newspapers for breaking lockdown rules while having an affair. Tegnell, who, like many Swedes, seems to see the UK through the lens of the Carry On films sounds quietly amused when I bring it up. “There’s something slightly British about that, if I may say so,” he says.

He says he does not envy Anthony Fauci, roughly his American equivalent, who has to stand next to President Trump as he delivers his anti-science rants, and says he is happy they don’t have that kind of situation in Sweden. Still, now he’s famous — just like Fauci and Ferguson. A men’s fashion magazine ran a tongue-in-cheek feature about how to dress like him — the key is a crumpled shirt — and photos have even emerged of his face tattooed on people’s arms. His three grown-up daughters think it’s hilarious, and have been sending him pictures of the latest fan art from the internet. 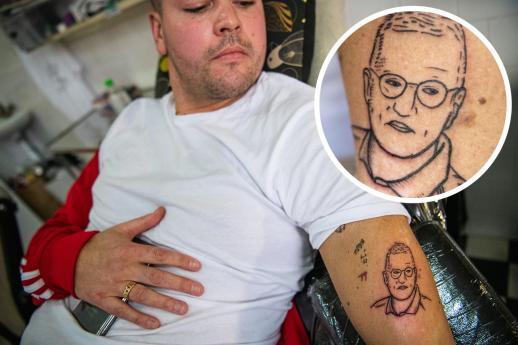 Instead of having a lover over for lockdown trysts, he has been spending his limited free time gardening and pottering about his farmhouse, where he lives with his wife of 39 years. Today, when he takes the train to work, people ask him for (socially distanced) selfies. He gets hundreds of emails every day, most of them — he claims — positive, thanking him for his work. No one shouts at him on the street. Don’t people ever tell him that he’s doing a rubbish job?

This might, I say, be less because people like him and more because Swedish people are so conflict-averse. He takes a moment to think about this, then agrees.

“Maybe in another country it could have been different,” he says.

@louiseelisabet
Posted by Mark Irvine at 01:26