Savaged By A Dead Sheep 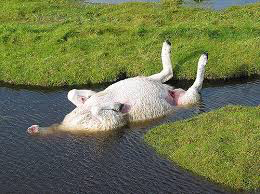 Well the newspaper article attacking Stefan Cross really amounted to being 'savaged by a dead sheep'.

Allegedly, some anonymous union official said "It does seem a huge amount", but the paper declined to use an 'on the record' comment from Unison's Peter Hunter who quickly sprang to Stefan's defence - see Facebook update below.

As people know Stefan was invited to a GMB members meeting last week, so I think we can rule out the GMB and Unison as the cowardly, anonymous source of this story.

Which leaves who, I wonder?

Anyway we all have more important work to do than waste our time on this nonsense and as Stefan says the secret of our success in Glasgow is down to teamwork across the claimant organisations.

WE ARE A TEAM.

THIS WAS POSTED BY PETER HUNTER FROM UNISON WHO IS PART OF OUR TEAM.

Well, the paper didn’t want to spoil their story with our positive quote. So for clarity, this has been the most legally complicated, factually messy, hardest fought, longest running and personally challenging piece of work I’ve ever known. All of that costs money.


We’ve been working with stefan and his team for nearly six years now. Each agencies stumped up the cash for that work in advance. It was a massive investment. We all shared what we could bring as the claimant group grew. And what we built was a group that had the ability and resource to reach a historic result. Action4Equality contributed generously to that process, as did we all.


I know stefan has already posted a tribute to Karl but it is no exaggeration to say he does the work of ten people and he is technically irreplaceable. Add that to a stellar line up of (expensive) QCs and you maybe see that ain’t cheap.
And then there is the untold story of the wheels. I hope stefan doesn’t mind me saying I’ve seen his Glasgow transport many times as races of to catch yet another flight home. Not a sports car. Not even a taxi. Yes folks, after days of round the clock work, Stefan gets the bus.


We stood together at various difficult times in the process, like losing to ridiculous legal decisions and attacks on the union for going on strike. So we stand together now.
This “story” is not a story at all. The story is about the outcome for the workers and that would never have happened at all, and certainly not on the proper scale, without all that each of us did. Together. And we should all be grateful to Stefan, Karl and co for all that went into that.

By Jamie Doward - The Observer 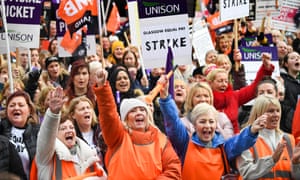 A claims company that was instrumental in securing a £500m equal-pay deal for thousands of female council workers in Glasgow is to receive £13m of the payout to cover its fees, the Observer has learned.

The sum paid to Action4Equality Scotland has raised eyebrows among some union officials, one of whom told the Observer: “It does seem a huge amount.” But Stefan Cross, the company’s founder and an equality lawyer who has secured similar successful claims against other councils in Scotlandand England, has defended its fee.

Glasgow city council, Action4Equality Scotland and the Unison, GMB and Unite unions confirmed this month that they had reached an agreement to settle about 14,000 claims brought by female council workers following a 12-year battle.

The announcement came after more than 8,000 women employed in the city’s homecare, schools, nurseries, cleaning and catering services went on strike last October in what is believed to be the biggest equal pay strike in the UK. As a result of the agreement, payments of a few thousand pounds up to more than £100,000 in some cases will be made between April and the end of the year.

Cross’s supporters say the payout was far greater than would have been achieved if it had been left to the unions.

Loved by many of his clients, Cross cuts a flamboyant figure. He has admitted to using his Ferrari to do the school run. Companies House reveals that he recently set up a company called Cross Family Investments. Action4Equality Scotland has assets of more than £3.3m, according to filings at Companies House.

Cross said he could not comment on the size of the fees owed to his company due to confidentiality. He said the fees, believed to be 6.5% of the estimated £200m that his company secured for the workers it represented, were not to be viewed as profits as it had to pay off “millions of pounds” in debts arising from bringing the claim.

“We will earn for 14 years’ work less than many other Scottish lawyers, including some trade union lawyers, have earned over the same period,” Cross said. “We are proud of our achievements.”
Posted by Mark Irvine at 06:49