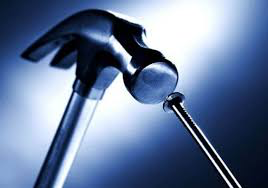 Daniel Finkelstein hits the nail on the head with his column in The Times on Brexit.

The Fink is right you know - it's time to call a halt to this nonsense, face down the ideologues on the left and right of politics - and demand a People's Vote on the final terms of any Brexit Deal or No Deal. 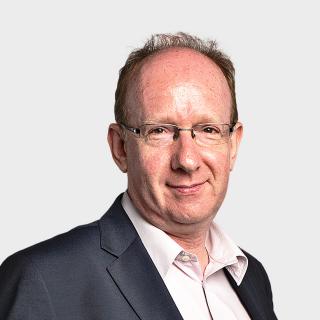 In the late 1960s, a group of young Frenchmen sat down to discuss current affairs. And as they talked, something strange happened. Initial mild support for General de Gaulle became much stronger, while opinions about American foreign aid turned from a little bit sceptical to downright hostile.

The conversation was one of the earliest studies of something called “group polarisation”, the tendency to become firmer and more extreme when discussing subjects with those of like mind.

There have been dozens of similar experiments since then, covering topics as diverse as feminism, the behaviour of judges, racial prejudice, even the willingness of burglars to take risks. Each shows the same tendency for group opinions to polarise. And in his 2009 book Going to Extremes Cass Sunstein collects them together.

If he were to publish a new edition, he would surely be tempted to include Brexit. Look at what has happened to the supporters of Brexit. Last night we learnt that people who once were quite pragmatic about the sort of relationship we should have with the European Union after leaving have become more doctrinaire. Only the hardest Brexit is now real Brexit. Nothing else will do. Any alternative is a betrayal.

These are people who once talked about how the EU was fine “when it was a common market”, or who said we might become members of the European Free Trade Association (Efta), or be like Norway. People who argued that we would arrange tariff-free trade with the EU. People who argued to remain in the customs union even after Brexit.

Patience with this position has been hard to maintain, and with last night’s vote mine, at least, is now exhausted.

I have never believed that Brexit was wise or in the national interest. But I did accept that we had a free and fair referendum. So I felt that parliament, which offered that referendum, had a duty to implement the outcome. I have supported it in doing that duty

I endorsed triggering Article 50, even though I thought that the country was making an error. And I backed negotiations to gain as much freedom from EU institutions as was compatible with a close trading relationship, peace in Ireland and the unwinding of a deep legal entanglement.

To find myself cheering on a Brexit I think is foolish, while its advocates vote the other way, is an absurd position to be in. And there are many others in the same position. We have gone along with Brexit because we thought that it had a democratic mandate. But now? I’ve reached the end of the road.

Brexiteers like the feeling that they have been betrayed by the political establishment. Well, I’m sorry, but you have not been betrayed. Brexit meant Brexit. Leave meant Leave. A deal has been negotiated that would allow us to leave in two months’ time and it’s you, the Brexiteers, who defeated it. Brexit is there. It’s on the table. It’s ready for you to carry away. Don’t you dare accuse me of bad faith if you fail to pick it up.

It is we who have been betrayed. Those who faithfully and diligently tried to make Brexit happen smoothly and on time, even though we had our doubts. We’ve been left high and dry.

Every day since the Brexit vote in 2016 I have resisted the idea of a second referendum. For parliament to be unable to implement the result of the vote it called is a ghastly failure. And all the arguments against a second referendum are as strong as ever — if a second, why not a third? And what will the question be?

But if the alternative is to be made to acquiesce in a no-deal Brexit then I’m prepared to wear this difficulty. I think this is quite a moderate response to being sorely tested.

I am more pessimistic than most people about avoiding no deal. Things look prohibitively difficult for the prime minister’s deal after it was defeated by 230 votes last night but no other arrangement seems to have much promise either. I still fear Jeremy Corbyn will not support a second referendum and until he does, Mrs May is right to try whatever she can and she should be supported in this until it becomes obvious something else can command a majority.

But for me, at least, last night was a watershed. Any viable alternative — Norway, a permanent customs union, a second referendum — needs now to be actively considered and I am certainly ready to support them.

One final thing. Leavers aren’t the only people who suffer from group polarisation. I know I am even more sceptical about Brexit now than I was two years ago. And there are many Remainers who have now persuaded themselves that the first referendum was invalid and that we can simply withdraw our Article 50 notification without further ado. 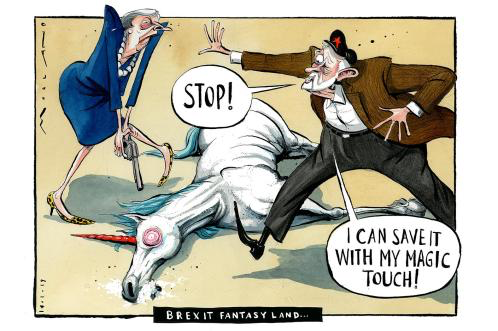 I liked Morten Morland's cartoon in The Times which portrays Jeremy Corbyn coming to the rescue with his 'magic' touch and inane gobbledegook about a 'Job First' Brexit.