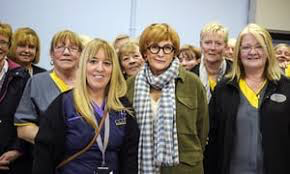 I've just nominated Frances Stojilkovic as 'Scotswoman of the Year 2018' award which is being organised by the Evening Times in association with the St. Enoch Centre.

Here's what I said about Frances in support of my nomination along with an internet link explaining the background to this annual event.

More details to follow soon and the very best of luck Frances who has played such a huge role in her local community and, of course, in Glasgow's long fight for equal pay.

Because becoming 'Scotswoman of the Year 2018' would knock an OBE, MBE or even a CBE into a cocked hat any day of the week - well in my book anyway!

Frances Stojilkovic - Scotswoman of the Year 2018

I would like to nominate Glasgow’s Frances Stojilkovic as ‘Scotswoman of the Year 2018’ because she is an inspiring, irrepressible role model for women of all ages.

Frances is one of Glasgow’s 2,500 Home Support Workers and for the past 15 years she has been looking after the most vulnerable people in our local community.

More recently Frances has played a vital role in Glasgow’s historic fight for equal pay which culminated in an agreement to settle the Council’s 14,000 outstanding cases at a cost of £500 million, after a lengthy battle in and out of the courts.

The WPBR was introduced originally in 2007, but the controversial pay scheme was subsequently condemned as ‘unfit for purpose’ by the Court of Session, Scotland’s highest civil court, in August 2017.

Frances started up her own Facebook page in support of the campaign for equal pay and this has been instrumental in galvanising support across the city - not just from other low paid workers (cleaners, carers, catering workers, clerical staff, classroom assistants etc), but from the wider public as well.

Frances’s high profile role in Glasgow’s equal pay campaign attracted the attention of Anne Robinson, well known for a variety of TV roles, who made a film about the 2018 struggle for pay equality - 'The Trouble with Women’ - highlighting the need for Glasgow's campaign almost 50 years after the 1970 Equal Pay Act.

In her spare time, Frances is also a committed community activist who has done a huge amount of voluntary work in Govanhill to increase community safety, tackle crime and generally improve the local area.

In recent years some of Glasgow’s most senior council officials have been awarded public honours from the Queen - OBEs, MBEs, CBEs - for their services to local government and the charitable sector.


So instead of the ‘usual suspects’ it would be great to see one of Glasgow’s unsung foot soldiers being recognised for her selfless contribution to better the lives of her co-workers and fellow citizens.