"Is this what you said you wanted? 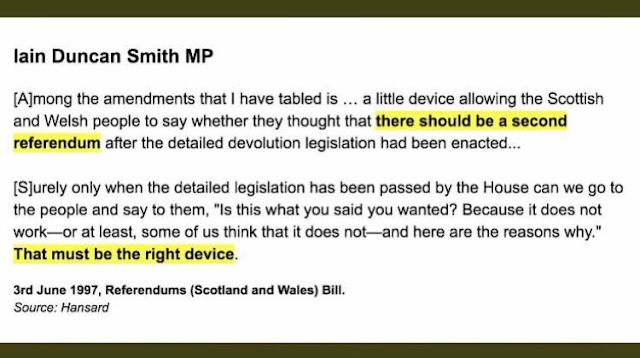 Iain Duncan Smith is one of the arch-Brexiteers and in this extract from the House of Commons records the former Tory leader is arguing for an 'affirmative' or second vote asking the people to confirm:

"Is this what you said you wanted?"

A good idea if you ask me, especially after the complete dog's dinner politicians have made of Brexit.

Channel 4 lays out the pros and cons of a No Deal Brexit, but the reality is that these obsessive anti-EU clowns are playing politics with people's lives and livelihoods.

Len McCluskey makes a fool of himself in this interview with the BBC in which he claims that Jeremy Corbyn's handling of Brexit has been 'brilliant'.

Now this is a shockingly stupid argument, even for someone like McCluskey, who presumably agrees with Corbyn's that the UK can leave the European Union and yet somehow maintain all the advantages of remaining inside the EU.

And, of course, this is no different to the argument that people can leave or refuse to join a trade union while still enjoying all the benefits of trade union membership.