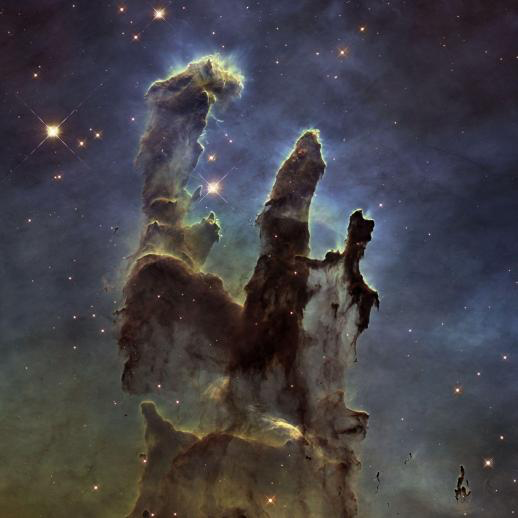 The Hubble space telescope has released new, visible light images of the Eagle’s Nebula “Pillars of Creation”, about 6,500 light years from Earth, in which new stars are being formed from gas and dust - Photo UPI/ALAMY

The Hubble telescope's wonderful new image of the 'Pillars of Creation' confirms what Joni Mitchell sang all this years ago - we really are stardust, billion year old carbon.

The only disappointment for me is that despite science, the profound evidence of our own eyes and ears, there are still lots of people who believe the world was made according to some 'holy book' and that their religion is the best because they are God's 'chosen ones'.

I came upon a child of god

He was walking along the road
And I asked him, where are you going
And this he told me
Im going on down to yasgurs farm
Im going to join in a rock n roll band
Im going to camp out on the land
Im going to try an get my soul free
We are stardust
We are golden
And weve got to get ourselves
Back to the garden