SNP Golden Goodbyes - A Racket Not a Fiddle? 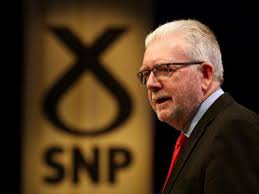 But here's a post from the blog archive which explains how Mike and some of his SNP ministerial colleagues took full  advantage of 'golden goodbyes' payments in taking their leave from Holyrood.

A complete racket and waste of public money -it's like having you cake and eating it at the same time.

Because the SNP's cockamamy 'rules' reward MSPs who leave the Scottish Parliament in disgrace, who leave of their own free will to take up another well paid job - and even those who retire with a generous pension and pension lump sum.

Tom Gordon hits the nail on the head with his description of Holyrood's golden goodbye payments scheme as a 'racket'.

The current scheme was put in place by MSPs back in 2008 and the SNP has presided over the same lousy system ever since.

Westminster has changed its rules, as have Wales and Northern Ireland, but the Scottish Parliament retained its scheme which is really the equivalent of money for old rope.

"Our system is bloated, out-dated, inflexible and unfair."

So while MSPs may be following the 'rules' the fact is the rules are not fit for purpose and the SNP should be ashamed of allowing the public purse to be shamelessly ripped off in this way. Definitely a racket not a fiddle!