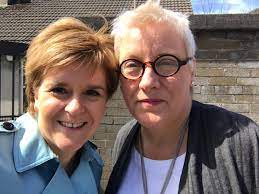 A number of my regular blog readers have asked how Cllr Mhairi Hunter can be doing all her publicly funded jobs at the same time.

I don't know, is the honest answer - seems impossible to me and although I have written to Cllr Hunter and her boss (Nicola Sturgeon) so far neither of them seems too willing to explain what is going on.

I did check on what health board members get paid and the answer is that their remuneration of £8,842 is based on a time commitment of 52 days per year or an average of 8 hours per week.

So that's a full-time role as a Convener in Glasgow City Council (@£28,000 plus expenses), another day a week at Greater Glasgow and Clyde NHS (@£9,000) - a running total of @£37,000 - and still Cllr Hunter has had time to spend at Nicola Sturgeon's office in Glasgow Southside.