Declan Walsh writing in The New York Times explains that the terror attack on a Sufi Mosque in Egypt was launched by Islamists who regard their victims as heretics and the 'wrong kind of Muslims'.

Not that different you might think, apart from scale and size, to the cold-blooded murder of the Glasgow shopkeeper, Asad Shah, who was killed by an angry religious extremist who regarded the kindly, gentle Mr Shah as a heretic.

The Islamic group behind the Sufi Mosque attack have also been murdering Coptic Christians in recent years, so it's not just fellow Muslims they regard as heretics who deserve to be put to death for not following their 'true' interpretation of the Koran.


Militants kill more than 235 people at Sufi Mosque in Egypt

CAIRO — Islamist militants detonated explosives and sprayed gunfire at a crowded Sufi mosque near Egypt’s Sinai coast on Friday, killing at least 235 people and wounding 109 more, in one of the deadliest attacks on civilians in the country’s modern history.

Attacks on mosques are rare in Egypt, where the Islamic State has targeted Coptic Christian churches and security officials in recent years. So the devastating attack on the mosque in Beer al-Abd, 125 miles northeast of Cairo, sent shock waves across the country.

“I can’t believe they attacked a mosque,” a Muslim cleric in the town said by phone. He requested anonymity for fear he could also be attacked.

Even by recent standards in Egypt, where militants have blown up Christian worshipers in church pews and gunned down pilgrims in buses, it was an unusually ruthless and deadly assault.

The attackers, who traveled in four-wheel-drive vehicles, exploded bombs inside the mosque, then sprayed worshipers with gunfire as they fled, state media reported. A military official said that a suicide bomber was involved in the attack.

The gunmen lingered at the scene even as emergency workers arrived to treat the injured, and opened fire on several ambulances, Ahmed el-Ansari, a senior government health official, said on state television.

Many of the wounded were rushed to the general hospital in the main town in Sinai, El Arish, where medics described chaotic scenes as staff struggled to deal with a flood of dead of injured.


“They pretty much have bullets in every part of their bodies,” said one medical official, speaking by phone, referring to gunshot victims. Others had extensive burns or lost limbs due to the explosion.

“We are swamped. We don’t know what to say. This is insane,” he said, asking not to be named out of fear he could be victimized by either the militants or the security forces.

The worshipers at the mosque were Sufi Muslims, who practice a mystical form of Islam that some orthodox Muslims and Sunni extremists consider heretical. The Islamic State had threatened and killed a number of Sufis in Bir al-Abd in recent months, but the group never targeted a place of worship, the cleric said.

The Egyptian military, which has been battling a local affiliate of Islamic State in northern Sinai for years, declared a curfew in Bir al-Abed and El Arish. Violence in Sinai surged after 2013, when Mr. Sisi came to power in a military takeover that deposed the democratically elected president Mohamed Morsi of the Muslim Brotherhood.

In Sinai the Egyptian military was pitted against an Islamist militia called Ansar Beit al-Maqdis that in 2014 pledged allegiance to Islamic State, and which has since proven to be one of the group’s most effective local affiliates. The group’s most successful attack targeted a Russian jetliner that crashed shortly after takeoff from Sharm el Sheikh in October 2015, killing all 224 people on board.

In addition, Egyptian security forces have been closely monitoring returning Islamic State fighters from Syria and Iraq, amid worries that an influx of battle-hardened jihadis could inject a volatile new element into Egypt’s militant mix.

The bombing comes as the Egyptian authorities have been hoping to stem the tide of Islamist violence in Sinai, thanks to their sponsorship of a Palestinian peace initiative involving Hamas, the militant group that controls Gaza.

Islamic State militants have previously used tunnels into Gaza to source weapons and get medical treatment for wounded fighters. One benefit for Egypt of the peace initiative, which Egypt’s General Intelligence Directorate has mediated, is greater control over those tunnels.

The Egyptian security forces have been closely monitoring returning Islamic State fighters from Syria and Iraq, amid worries that an influx of battle-hardened jihadis could inject a volatile new element into Egypt’s militant mix.

Many residents in Bir al-Abed, which is on the main road through northern Sinai, are Bedouins from a tribe called the Abu Greir, who are predominantly Sufi. Residents said that, despite the recent threats by Islamic State, the town had been considered largely peaceful. The peace deal involving Hamas had further raised hopes that security was improving.

In a statement, Hamas issued denounced the attack as a “criminal explosion” that “violates all heavenly commandments and human values” because it attacked a mosque. “It is a grave challenge to Muslims worldwide,” the group said.

Over the past year, Islamic State militants have carried out a series of attacks on Christians in Egypt that have killed more than 100 people. In October, Mr. Sisi ordered a major reshuffle of his security team after an ambush in the desert left at least 16 Egyptian security officials dead.

That attack was later claimed by a previously unknown group called Ansar al-Islam, which is believed to have links to Al Qaeda.


One of the people I follow on Twitter, Sunny Hundal (a journalist) posted this video of a leading politician in Pakistan, Raja Pervez Ashram, attacking Ahmadi Muslims who share the same religious faith as the Glasgow shopkeeper.

"Imagine if an Israeli politician said this about Palestinians....wouldn't it be outrageous? Instead, there's silence."

Raja Ashraf, just to make things even more depressing, is a former Prime Minister of Pakistan.

Can you imagine what this ignorant oaf says 'off camera' if this is how he speaks and behaves when his views are likely to be reported?


The BBC reported on the murder of a Glasgow shopkeeper, Asad Shah, by a fellow Muslim, Tanveer Ahmed, who regards Mr Shah as a heretic.

We know this because Tanveer Ahmed released an extraordinary statement in which he admits killing Mr Shah because Mr Shah 'disrespected' Islam, or to be more accurate Mr Tanveer's interpretation of Islam.

Now if you ask me, this is eerily similar to the words of the Glasgow imam, Habid Ur Rehman, a holy man, allegedly, who expressed his support recently for the murder of the governor of Punjab, Salman Taseer, who was slain by one of his own bodyguards for seeking to protect Christians from Pakistan's infamous blasphemy laws.

So the Glasgow imam glorifies the murder of a fellow Muslim in Pakistan and then a chap from Bradford travels all the way too Glasgow to attack and kill another Muslim, again in the name of his religion.

As regular readers know, I'm not a religious person and I don't believe that the Prophet Muhammad spoke to God, or that he flew around what is now the Middle East on a winged horse or that he split the moon on two.

Perhaps that makes me a heretic or a blasphemer in the eyes of the Glasgow imam or the chap from Bradford, and therefore a perfectly legitimate target for those seeking to enforce their religious views through the use of violence, intimidation and murder.

If so, there is something troubling about the fact that mainstream Muslims in the UK seem to hold views that are deeply at odds with our democratic, live and let live way of life.

The man accused of murdering Glasgow shopkeeper Asad Shah has issued a statement saying he carried out the killing because he believed Mr Shah had 'disrespected' Islam.

Tanveer Ahmed, 32, from Bradford, is accused of killing Mr Shah outside his shop in Glasgow almost a fortnight ago.

In the statement he denied the incident had anything to do with Christianity.

Mr Ahmed claimed Asad Shah had "disrespected" Islam by claiming to be a prophet.

The shopkeeper, an Ahmadi Muslim, who had moved from Pakistan to Glasgow almost 20 years ago, was found with serious injuries outside his shop on 24 March. He was pronounced dead in hospital.

During the police investigation officers claimed the incident was "religiously prejudiced" and confirmed both men were Muslims.

Hundreds attended a silent vigil in Mr Shah's memory and more than £110,000 has been raised for his family through public donations.

Tanveer Ahmed made no plea during a private court appearance, where he was charged with Mr Shah's murder 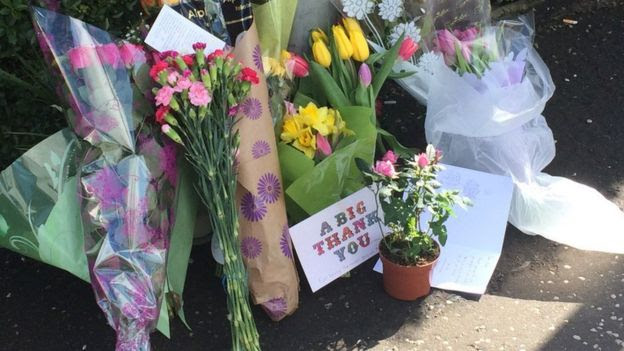 He was remanded in custody and is expected to appear at the High Court at a later date.

This highly unusual statement was made through his lawyer, John Rafferty, after Ahmed's second appearance at court before sheriff Brian Adair.

Ahmed made no plea during private court appearance, charged with Mr Shah's murder.

He was remanded in custody and is expected to appear at the High Court at a later date.

The highly unusual statement was made through Mr Ahmed's lawyer, John Rafferty after his second appearance at court before sheriff Brian Adair.

The statement given is: "My client Mr Tanveer Ahmed has specifically instructed me that today, 6 April 2016, to issue this statement to the press, the statement is in the words of my client.

"Asad Shah disrespected the messenger of Islam the Prophet Muhammad peace be upon him. Mr Shah claimed to be a Prophet.

"When 1400 years ago the Prophet of Islam Muhammad peace be upon him has clearly said that 'I am the final messenger of Allah there is no more profits or messengers from God Allah after me.

'I am leaving you the final Quran. There is no changes. It is the final book of Allah and this is the final completion of Islam'.

'There is no more changes to it and no one has the right to claim to be a Prophet or to change the Quran or change Islam.'

"If I had not done this others would and there would have been more killing and violence in the world.

"I wish to make it clear that the incident was nothing at all to do with Christianity or any other religious beliefs even although I am a follower of the Prophet Muhammad peace be upon him I also love and respect Jesus Christ."