Here's a hard-hitting article from The Times which paints a horrifying picture of exploitation and organised child abuse in the Govanhill area of Glasgow.

I'm sure the authorities Glasgow are dealing with the situation, but whatever steps are being taken they are clearly not on top of the problem if local residents can attest to such shocking experiences.

Surely, the solution must start with taking these exploited children off the streets and if necessary, removing them from the 'care' of their parents.

Govanhill child sex trade: ‘There are so many . . . it’s easy pickings for child abusers’

By Marc Horne - The Times 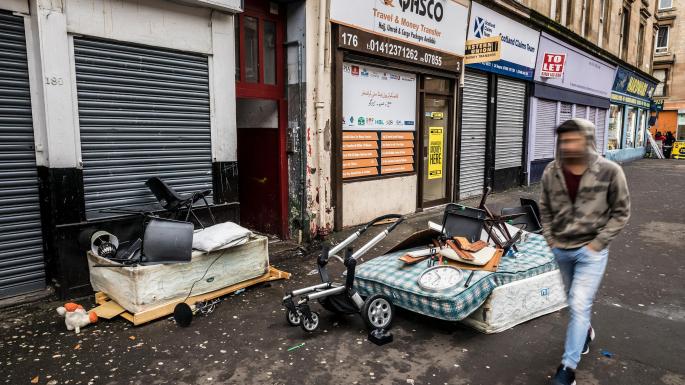 Children in the Govanhill area of Glasgow are being offered by their own parents to paedophiles, according to residents who say “people come from all over” to abuse girls and boys not yet in their teens - TIMES PHOTOGRAPHER JAMES GLOSSOP

It is lunchtime in Neeson’s, a tiny pub in the heart of Govanhill. A dozen or so regulars, perched on a semi-circle of high stools, fall silent as Margaret Reilly, the manager, finishes polishing a glass, leans on the bar and clears her throat.

“How many of you have been propositioned by Roma children?” she asks. Every male in attendance raises an arm. It is an extraordinary, sobering moment and many are keen to recount their experiences. 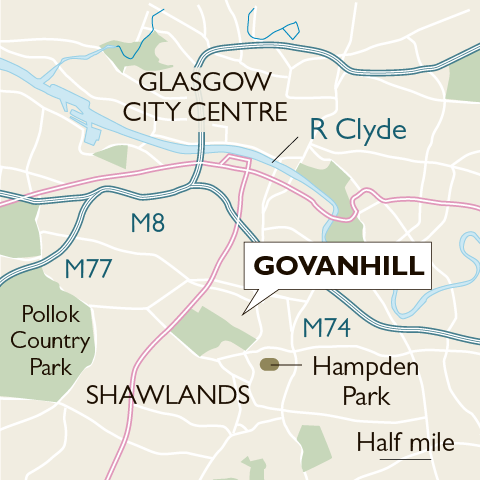 “I’ll never forget it,” says one man, a burly Geordie with a Celtic shirt stretched over his paunch.” It was quarter past seven in the morning. A wee lassie of around nine or ten came up to me and offered oral sex.”

He winces at the memory before adding: “I was so shocked and told her to go home to her mum and dad. Things are bad round here.”

Another regular said: “All the guys who come in here have had wee lassies offered to them, but it goes further than that. My wife was going to work one morning and saw a wee boy standing out on the street just wearing a vest and shorts. It was a freezing day and when she asked him if he was OK he told her he was ‘waiting for the man’.

“The guy in the shop next door told her he was there every day. Guys would come in a car, pick him up, take him away and then drop him back again. He was about five years old and she reported it to the police.”

Ms Reilly backed up their accounts. “I have been round to the police and complained because the guys are being propositioned when they leave the premises. These are boys and girls aged around 12. The police aren’t surprised when you tell them about it. They say they are dealing with it.”

Frances Mowat Stojilkovic, a community campaigner, insists it is a pattern that has become familiar to residents in this part of Glasgow. She said: “The wee boys and girls gather outside the pubs late at night. I told one girl to go home and she said, ‘No, mum says to stay here’. They [the parents] are putting them out on the streets and telling them to come back with money.”

Sure enough, as night falls in Govanhill a Romany girl can be seen leaning up against the outside wall of the nearby Victoria Bar. She is heavily made up, wearing a thigh-skimming skirt and resting with one hand on her hip. She is not yet in her teens.

Inside the pub, the staff are initially reluctant to acknowledge or discuss the issue of child sex exploitation. However, before long the female bar manager sidles over and concedes it is causing deep concerns. “I called the police after two of my regulars, who are elderly gents, were propositioned outside by two girls” she said. “The lassies were primary-school age. They stand outside when football matches are on. They are just wee girls but their parents send them out wearing make-up and high heels. They are dressed up to the nines, like the girls you see on TV in My Big Fat Gypsy Wedding.”

Staff and customers in the area’s other bars all have their own tales to tell. One worker at the Queen’s Park Café said: “I have seen it myself. One time I walked past a close and through the darkness I saw a young Roma girl, who was around 12 or 13. She was naked below the waist and there was an Asian man in his fifties or sixties standing behind her. A blind eye has been turned to this sort of thing for far too long.”

A few streets away in the Penny Farthing, Michael, muscular, middle-aged and tattooed, admits he is now afraid to leave the house after dark. “It just isn’t safe,” he insists. “The streets are full of pimps. They’ll offer to get you anything you want; women, young girls, even wee boys.

“It sounds terrible to say, but that kind of thing has become almost normal in Govanhill. No one is surprised by it anymore”

On Allison Street, the neighbourhood’s main thoroughfare, one butchery worker snorts with derision when asked if he has encountered any problems. “There are men who approach you and offer you their wife,” he said.

“If you say no, they’ll offer you their daughter instead. It’s happened to me.”

Fiona Jordan, a resident and community campaigner, claimed that construction workers on Langside Road were approached by Romany men, who asked if they wanted to have sex with young boys, earlier this year.

She said: “They were absolutely appalled. We all were. However, if you complain about what is going on you are treated either as a bothersome curtain-twitcher or as a racist out to stir up trouble needlessly.”

Ms Mowat Stojilkovic says the area has become a magnet for paedophiles. “People come from all over to Govanhill because there are so many vulnerable kids,” she says. “It is easy pickings for abusers.”

It is a suggestion that draws nods of recognition at Neeson’s Bar. Regulars claim that one individual, a white Scottish male, who has become notorious in the community, regularly travels from Fife to attempt to abuse children in Govanhill.

One of the regulars says: “One day three Roma women were pushing a wee lassie along in a pram across the road at Lidl. Her name was Magdala. I will never forget it. This guy approached them and they were taking money from him. He pointed into the pram and said ‘Magdala girlfriend’.

“She must have been two or three at most. I felt sick to the bottom of my stomach. Another time I saw wee boys approaching him at the same spot. Everyone recognises him and he’s been reported numerous times. This has been going on for too long now. It needs to stop.” 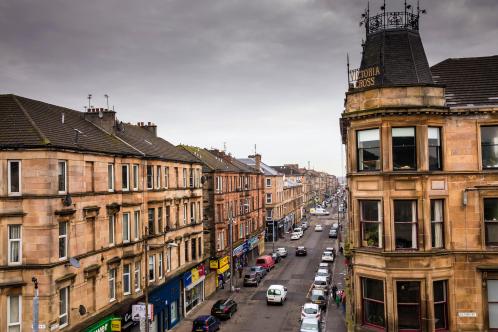 In the past few years Govanhill has become Scotland’s most multicultural and racially diverse neighbourhood.

The district houses 15,000 people from at least 42 different nationalities within one square mile.

The arrival of large Irish and Asian communities in the 1960s led to it being nicknamed “Little Donegal” and “Wee Bengal”.

Today its streets reflect the colours, cuisines, smells and languages of several continents.

Much of the shop front signage is in Arabic, Urdu and Slovak, while the old Crosshill Victoria Church on Dixon Avenue is now the al-Farooq mosque, education and community centre.

Attracted by cheap rents, large numbers of Roma immigrants from Slovakia and Romania arrived after both countries were admitted to the EU in 2004 and 2007 respectively.

Earlier this year, four rogue landlords who owned properties in Govanhill were banned from renting out homes.

They included Muhammed Anwar who has since been jailed for three offences related to child sex abuse.

In May a BBC Scotland documentary found that adult victims of human trafficking have been sold to crime gangs in Govanhill and other parts of Glasgow.

It discovered that eastern European women were forced into sham marriages to men from Pakistan and India seeking to apply for residency in Britain.

In February, three Slovak women, suspected to have been raped, abused and forced to work as prostitutes, were rescued following police raids on three properties in Govanhill.
Posted by Mark Irvine at 00:51