Alex Bell conjures up a powerful image with his description of Scotland's former first minister, Alex Salmond, as a 'dancing bear' over his hook up with the Kremlin controlled broadcaster, Russia Today

ALEX BELL: By hooking up with Russia Today, Alex Salmond has reduced himself to a sad dancing bear

By Alex Bell - The Courier 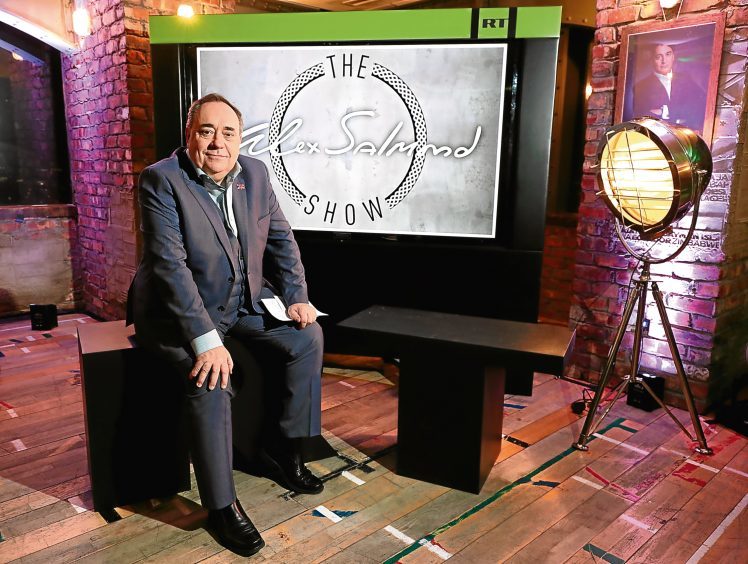 Alex Salmond during the launch of his RT chat show The Alex Salmond Show, at Millbank Tower in London.

Russia offered a meeting between Alex Salmond and Vladimir Putin in 2012. The offer was not pursued.

Who on earth would think it a good idea to hook up with a near-pariah state when trying to make your own claim to sovereignty look legitimate? To which the glib answer is: Alex Salmond.

By agreeing to host a chat show on the Russia Today channel, which launches today, Mr Salmond has linked Scotland’s nationalism with Russia’s.

It is a bizarre and career-damaging move by the former First Minister.

The meeting between officials of the Russian Embassy and Scottish Government took place some time in 2012. A great many diplomatic and international visitors come to Edinburgh, most of them in wonder that any country could devolve power without a shot being fired.

In the run up to the 2014 referendum, the volume of contact with foreign governments increased. The meeting with Russian officials was more interesting than others for obvious reasons – it had an air of intrigue lacking from most appointments.

As I recall, we went through the usual chat of wanting an independent, peaceful country that would be a positive contributor to world affairs.

The Russians were interested in the commitment to no nuclear deterrence.

Then it was suggested that if Alex Salmond were to visit Moscow then this would be looked on positively. We took it to mean a meeting with Mr Putin.

The meeting ended, hands were shaken and smiles exchanged, and when the embassy representatives were gone, we agreed there would be no chance of following up the offer, and that was that.

What stood in 2012 still stands – Russia is not a functioning democracy, does not respect human rights, is in the habit of murdering government critics and would clearly like to destabilise the west.

Washington and London seem certain that Moscow is active, via social networks, in spreading propaganda which influences western democracy – a claim which is hard for the citizen to prove but, equally, is unlikely to be made up.

Theresa May, beset by problems like someone who has knocked a wasps’ nest, chose the issue of Russian ‘fake news’ for her speech at the Lord Mayor’s banquet. She said Russia was undermining British institutions.

We already know Moscow stands accused of doing the same in the USA – three associates of the Trump presidential campaign have been indicted by US authorities on charges relating to contacts with Russian officials. And there are reports Russia is using the Catalan crisis to whip up anti-EU sentiment.

Thus it seems a particularly stupid time to sign up to a show on a Russian government-supported broadcasting channel.

Mr Salmond has been lured by the siren calls of public exposure and money – none of which he is in need of. He’s already a darling to the SNP loyal, and is a millionaire.

Thus it is only an insecure ego which explains why he should lend his name to the propaganda channel.

The issue is not that he will become Mr Putin’s patsy – his role as a “useful idiot” has already been served by bringing huge publicity for an otherwise obscure cable channel.

New or little-known broadcasters win coverage by signing well known names – that is how the industry works.

The quality of the show is secondary to the PR boost – should Mr Salmond resign a week, month or year later, Russia Today will not care.

Bizarrely, Mr Salmond’s former foe, Kenny MacAskill, came to his aide, claiming that if only Britain had found an international job for the ex-FM, he wouldn’t have had to take the chat show.

Mr MacAskill seems to have overlooked two points: Mr Salmond’s political career has been dedicated to undoing Britain and he cannot therefore be trusted to represent British interests (nor, you would think, would he want to). Secondly, Eck had just demonstrated the kind of poor judgment in signing up to RT which should disqualify him from any position of authority on global matters.

This is a sad tale. Mr Salmond could have sat out his days as the eternal darling of the nationalist movement, like a king across the water, toasted by devotees.

He could have become Scotland’s political elder, offering time and expertise to develop aspects of this country. He could have joined the boards of banks, served as a trustee to charities, while enjoying the interest from his investments.

Instead he’s eroding his own political capital, selling cheap his reputation. It is a blessing to his successors.

Nicola Sturgeon found his constant interventions and publicity seeking a distraction. The more he devalues himself, the less she has to worry about the consequences of what he says.

The sadness is that a man blessed with great political talents should become a novelty act.

He is joining that club of men who could have done great things but were overcome by their own appetites, like Boris Johnson or ‘Gorgeous’ George Galloway.

Mr Salmond – once destined for greatness – has become cauterised from doubt, dancing like a bear who thinks the audience has come to praise, not pity him.

Alex Bell is a former head of policy and speechwriter to Alex Salmond
Posted by Mark Irvine at 00:52