Here's an extract of a great article by Robert Shrimsley in the Financial Times which pokes fun at Jeremy Corbyn and his role as leader in Labour's now infamous anti-Semitism row.

Read the full article via the link below to the FT.

Jeremy Corbyn and a true socialist, anti-slavery passover story Pharaoh, a life-long opponent of forced labour, is smeared by Moses

Jeremy Corbyn: friends and supporters in Phomentum urged him to harden his heart, saying he was a saintly man who was fighting for the oppressed

Jeremy Corbyn is battling criticism that through inaction or indifference he has allowed an anti-Semitic culture to bloom among his supporters on the leftwing of his Labour party. As the row grew, the UK opposition leader attended a Passover dinner organised by Jewish supporters on the party’s far-left.

Passover tells the story of how Moses confronted Pharaoh and led the Jewish slaves out of Egypt. Here, perhaps, is the Corbynite version. And so it came to pass that Moses went to Pharaoh in Egypt and said: “My people are slaves; they are held in bondage and forced to labour in terrible conditions.”

And he said to Pharaoh: “Let my people go.” And Pharaoh said: “How dare you accuse me of slavery. This is a vile smear. I have been an anti-slaver all my life. I would not tolerate slavery in my country.” And Moses said: “Well, what about those slaves over there?” And Pharaoh replied: “Well OK, there may be pockets of slavery but the idea that Egypt has a systemic problem with it is frankly offensive.”

So Moses pointed to Pharaoh’s palace, which was built by slaves, and to his barge, which was rowed by slaves, and to the pyramids, whose construction definitely had a slavish dimension. So Pharaoh’s office issued a statement making clear that he had never actually seen any of these slaves, but if he had he would certainly have challenged it because “he has been an anti-slaver all this life”. 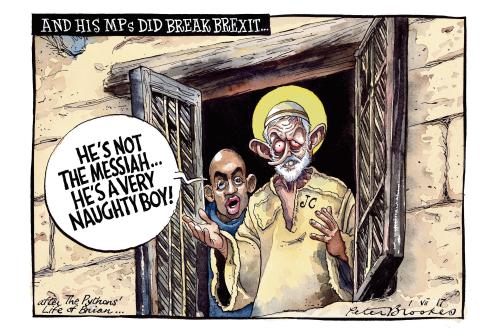 The Times cartoonist Peter Brookes has some fun with Jeremy Corbyn's policy on Brexit because, if truth be told, the Labour leader is a left-wing 'ideologue' who has vehemently opposed the UK's membership of the European Union for many years, on the bogus grounds that the EU is a 'bosses club'.

So while Chuka Umanna (in the background) tells the faithful that Jeremy Corbyn really isn't the 'Messiah', the Labour leader continues to pretend that the UK can leave the EU while at the same time preserving all benefits of remaining in the EU which is completely crazy, of course.

Freedom of movement within the EU is a great benefit to many UK citizens, younger and older alike, yet that is one of the reasons for Jeremy Corbyn setting his face against continued membership of the Single Market.


My understanding of Labour party policy on Brexit is that its leader firmly support the UK leaving the European Union (EU), so long as the country continues to enjoy all the benefits of being a member of the EU.

Which sounds like the political equivalent of being a little bit pregnant, if you ask me - it's the same as having your slice of cake and eating it at the same time.

In the first test of his leadership since the general election, Jeremy Corbyn yesterday ordered Labour MPs to abstain over a vote in the House of Commons to stay within the Single Market and the Customs Union, both of which have major implications for jobs and future growth in the UK economy.

Three shadow ministers (Ruth Cadbury, Andy Slaughter and Catherine West), were sacked for defying their leader's order and and a fourth (Daniel Zeichner) resigned before he could be shown the door.

UK politics has an 'Alice in Wonderland' feel to it these days with arch-rebel Jeremy Corbyn demanding loyalty from his troops and believing that 'six impossible things before breakfast' is perfectly realistic.

Which is complete nonsense, of course, as the UK's mad march towards Brexit will show us all in the weeks and months ahead. 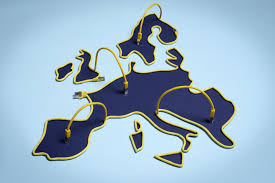 The big political news on Twitter right now is that Jeremy Corbyn is to whip Labour MPs into 'abstaining' on an amendment which would commit to membership of the EU's single market.

Now given that the majority of Labour supporters voted to remain in the Europe, along with the majority of Scots and a majority of young voters, you would think Jezza would set aside his personal hostility towards the EU and support this amendment from one of his own backbenchers, Labour MP Chuka Umanna.

Because an awful lot of water has flowed under the bridge since the EU referendum in June 2016 which never specifically asked voters for their views on the pros and cons of leaving the Single Market and/or the Customs Union.