I passed through Glasgow's George Square the other day following its recent 'face-lift' - prompted by a previous architectural competition to do something much more radical with this famous city centre landmark which ended in acrimony and failure.

So, I can report that the 'new' George Square looks just the same as the 'old' George Square - except that the red tarmac surface has been replaced with a dull shade of grey, perhaps inspired by Glasgow's equally famous wet weather.

To my mind, the politicians have let the city down again and turned Glasgow into something of a laughing stock - with their ridiculous antics and sudden U-turns which have led us all round full circle save for this uninspiring fade to grey. 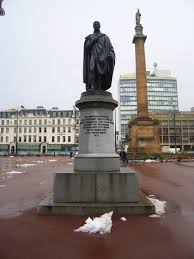 I hear that Glasgow's famous George Square is to be given a big face lift - and that the historic statues dotted around the place will be removed and found a new home elsewhere.

Now in all fairness I have to say that this is a good idea - in fact it's long overdue.

Because to most of people walking through or congregating in George Square from time to time - the statues mean nothing - with one or two notable exceptions.

Apparently a competition wil be decide what the new George Square will look like - with six internationally renowned architects talking part - and the notably opinionated citizens of Glasgow will be asked for their views, no less.
Goodness me, let's not get carried away - the city fathers will be talking about world peace and socialism next.
I know some of this because I listened to an interview on BBC Radio Scotland with the Glasgow City Council leader - Councillor Gordon Matheson.

Now Councillor Matheson was so excited he sounded like a wee boy who wakes up one morning and finds himself in a sweetie shop - with no adults around to supervise his sugar intake.

Me, I'm a little more sceptical - because I've been around long enough to know that being asked for your opinion is quite different - to anyone actually listening to what you have to say.

So I'll throw in my tuppence worth and what to see what happens in the New Year - when the whole business kicks off in earnest.

Meantime if anyone's listening about what to do with all these spare statues - I'd put them on one of the park avenues in Glasgow Green.

Not only would that look splendid - The Avenue of the Giants (Glasgow Version) - but people going for a stroll, walking their dogs or even just visiting our fair city - could stop and read about some of famous figures from the past.

Especially if there was a little more information about the people concerned - few of whom are household names by the way - and the nature of their connection with Glasgow to merit a statue being raised in their honour. 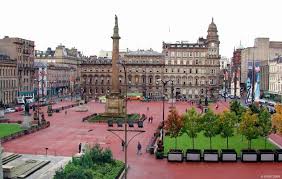 If I were one of the six big, internationally renowned companies who had been invited by Glasgow City Council - to submit detailed and costed proposals to transform the city's George Square - I would be really hacked off this morning.

Because only a couple of weeks ago - to a great fanfare of publicity - I'm sure I heard council leaders tell the world that this exciting project would be definitely going ahead.
And that the good people of Glasgow had only 14 days or so in which to register their views - for good or ill.
Now I never did quite understand the need for such a rush - seemed a bit peculiar to me that such a big decision had to be made in such a short space of time.
But now it appears that the whole thing was a complete waste of time and money.

Because last night I heard the council leader, Gordon Matheson - tell the world via the telly that the six exciting visions for a new George Square (one fit for the 21st century) - have all been thrown in the bin.

The council will now proceed with a more modest faceover for George Square - in time for the Commonwealth Games - and the council leader even kept a straight face as he confirmed that this more modest proposal would still cost the public purse £15 million.

I can't be the only person to find it hard to believe that it will still cost the city £15 million - for putting in place a bargain basement Plan B.
Never mind all the time, effort and no doubt money involved - in asking all the internationally renowned firms of architects to draw up their own proposals for transforming the city centre - - with covered walkways, water fountains and all manner of things.

To my mind council leaders have turned Glasgow into a laughing stock - and those responsible for the farce should make room for others - with some much needed common sense.