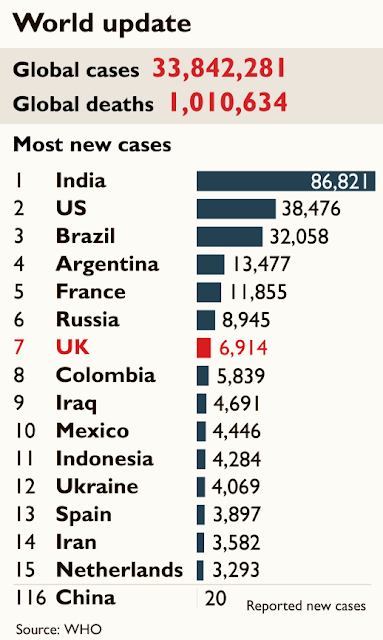 I do wonder about the justification for requiring people to quarantine on their return from various EU countries when both Scotland and the wider UK are now recording so many more new Covid-19 cases per head of population.

Even when there is a good reason for travellers and returners to quarantine the Scottish and UK governments both seem determined to make life as difficult as possible for people by demanding that they must isolate for a full 14 days.

Yet in other countries if two consecutive Covid-19 tests are negative, the individuals concerned are able to reduce their quarantine period to only 5 days.

Interestingly this actually happens now in the UK in the case of 'key workers' in care homes and hospitals who require to be tested before resuming their normal duties.

So why are politicians making life so difficult for people who either need or wish to travel abroad - has all this power gone to their heads or can they not organise the kind of testing regime needed to resolve the problem? GERMANY
Germany lifted its blanket warning against travelling to all countries outside the EU, although little is likely to change for most travellers. The foreign ministry extended a warning for parts of Belgium to the entire country, and warned against travel to Wales and Northern Ireland.

ITALY
The Italian Senate has reopened following a one day shut-down after two Five Star senators tested positive. All the party’s senators rushed to be tested after Francesco Mollame said he caught the virus while sitting maskless in a car with a person who emerged as an asymptomatic sufferer. Eight days later he developed a fever but had eaten in a restaurant with Marco Croatti, a second senator who then attended meetings with fellow politicians before testing positive. 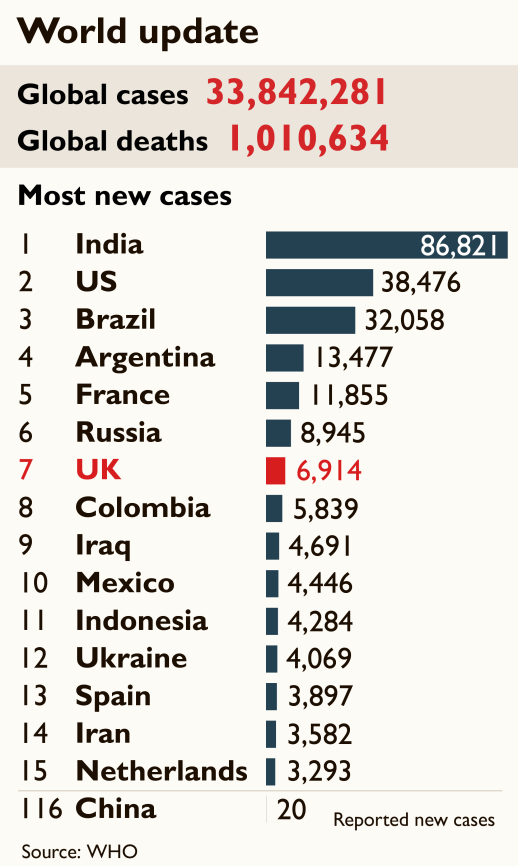 THE NETHERLANDS
The Dutch death count has been revised upwards by a third to 10,067. The figure is based on a full count of death certificates rather than the mortality of people who tested positive. Fifty-three per cent were men and almost all were over 75.

AUSTRIA
Vienna’s trams can be seen gliding past Baroque palaces, but now one will help administer the flu vaccine. The “vaccine tram” will provide residents with free vaccinations to reduce any potential pressure on hospitals from coronavirus patients.

Mr McCormack said that New Zealand citizens and residents would be allowed to visit New South Wales, Australia’s most populous state, and its remote Northern Territory from October 16. It will be the first time that foreign nationals will have been permitted to enter the country since its borders were closed in March.


“This is the first stage in what we hope to see as a trans-Tasman bubble between the two countries,” Mr McCormack said.

However, Jacinda Ardern, New Zealand’s prime minister, said that New Zealand would not open its borders to Australians for now. She added that individuals who did travel to Australia would have to quarantine on return.

CANADA
Quebec has imposed stringent new restrictions. “The situation has become critical,” François Legault, the premier, said. “If we don’t want our hospitals to be submerged, we must take strong action.” Restaurants, cinemas, casinos, bars and theatres have been closed and there is a ban on household visits in “red zones”, including Montreal and Quebec City.

ASIA
Governments are using the virus as an excuse for surveillance and censorship measures, a new report warns. “States are unlikely to relinquish new-found powers,” says Verisk Maplecroft, which compiles an annual Right to Privacy Index.
Posted by Mark Irvine at 02:37