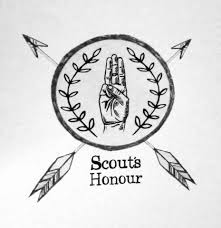 The SNP is in bother for using a woman dressed in a Scout uniform to get across a party political message on independence.
The BBC reports that Scouts Scotland have reported the matter to the office of the Scottish charity regulator, OSCR.

The SNP has been criticised after using footage of a woman in a Scout uniform as part of a party political broadcast.

The broadcast was originally shown on TV in February, before being repeated on BBC One Scotland and STV on Monday.

The Scouts have rules which state that members in uniform must not endorse any political party or candidate.

The organisation said it had spoken to the party and had also "reported the situation" to the office of the charity regulator.

The SNP said it had engaged with the Scouts when the advert was first aired in February, and that they were "somewhat surprised" by the complaint after Chief Scout Bear Grylls appeared in uniform at the Conservative Conference in 2017.

The party political broadcast features a woman identified as "Helene" from Kirkhill as being among a number of Scots who have changed their position on independence.

In the broadcast, she says: "For my children, I feel that an independent Scotland is going to offer them an opportunity to be part of something bigger."

A spokeswoman for Scouts Scotland said the matter had been raised with the Office of the Scottish Charity Regulator (OSCR).

She said: "The Scout Association is not connected with any political body and have rules which state that members when in uniform or when representing the Scouts must not endorse any political party or candidate.

"We have spoken to the SNP, reported the situation to OSCR and the issue has been investigated at a local level through our complaints procedure."

In response, the SNP highlighted Mr Grylls appearing at the Conservative Party Conference in 2017.

It was defended at the time by the Scouts, with Mr Grylls saying he had not endorsed the Tories and had been seeking to "champion Scouts in seeking government help to reach the toughest communities and most isolated young people in the country".

Referring to the statement by Scouts Scotland, an SNP spokesman said: "The chief scout appeared on stage at Tory party conference in his full uniform in 2017 so we're somewhat surprised by these comments.

"It is also disappointing to read this media statement today given we engaged with Scouts Scotland several months ago when this broadcast was first on TV."

The Scottish Tories said the fact the Scouts had originally aired their concerns in February meant it was "astounding" the "dishonest footage" had been aired again.

The party's Miles Briggs said: "The SNP have questions to answer about how they let this happen.

"They've been caught out blatantly trying to misrepresent the Scouts and drag them into politics. This must be investigated further and the SNP need to apologise for misleading the public."