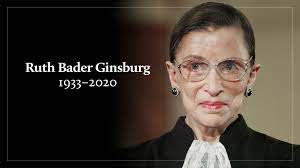 Ruth went to Harvard Law School in 1956 and qualified as a lawyer three years later, but in a completely male dominated profession she failed to receive a single job offer despite  graduating at the top of her class.

"Not a law firm on the entire city of New York would employ me. I struck out on three grounds: I was Jewish, a woman and a mother."

By all accounts an admirable American who fought for equal treatment under the law for women and men, black and white, young and old.