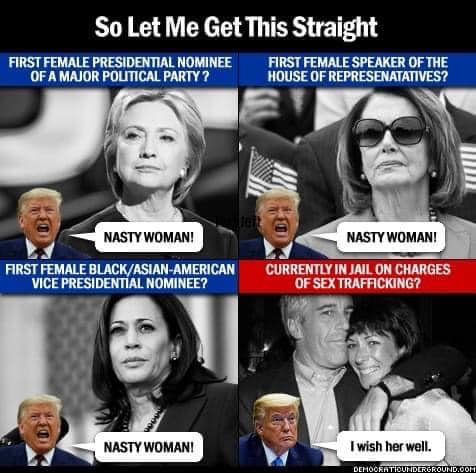 Donald Trump has a 'woman problem' which makes him lose his volatile temper and behave badly towards women who don't see the sexist old goat as some kind of catch.

Donald Trump tries to excuse his Secretary of State, Mike Pompeo, who apparently demands that junior staff run all kinds of personal errands for him such as walking his dog, picking up his dry cleaning and making casual dinner reservations.
But Trumps ends with a real doozy when he says he'd rather Pompeo was on the phone with a world leader than have him wash dishes because his wife isn't there!
Not so much a revealing insight into how the American Government works, as great example of how the sexist old goat's mind works.

As I've said before Trump has a real problem relating to articulate, professional women who don't see the sexist old goat as a some kind of 'catch'.