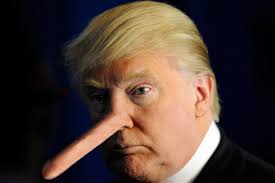 The New York Times reports that Donald Trump paid only $750 in taxes in 2016 and the same derisory sum during his first year in the White House.

Now that's less than most ordinary Americans pay every year in taxes and while Trump claims to be a wealthy millionaire it turns out he has not paid any income tax whatsoever for 10 out of the previous 15 years.

What a low life Trump is - because it's as plain as the nose on his face that 'Donald the Deadbeat' has been working really hard to avoid paying his own fair share of taxes while pretending to be on the side of ordinary, hard working Americans who pay their way!

Read the full story for yourself via the link below to the New York Times.

"Donald J. Trump paid $750 in federal income taxes the year he won the presidency. In his first year in the White House, he paid another $750.

"He had paid no income taxes at all in 10 of the previous 15 years — largely because he reported losing much more money than he made.

"As the president wages a re-election campaign that polls say he is in danger of losing, his finances are under stress, beset by losses and hundreds of millions of dollars in debt coming due that he has personally guaranteed. Also hanging over him is a decade-long audit battle with the Internal Revenue Service over the legitimacy of a $72.9 million tax refund that he claimed, and received, after declaring huge losses. An adverse ruling could cost him more than $100 million."
https://www.nytimes.com/interactive/2020/09/27/us/donald-trump-taxes.html?