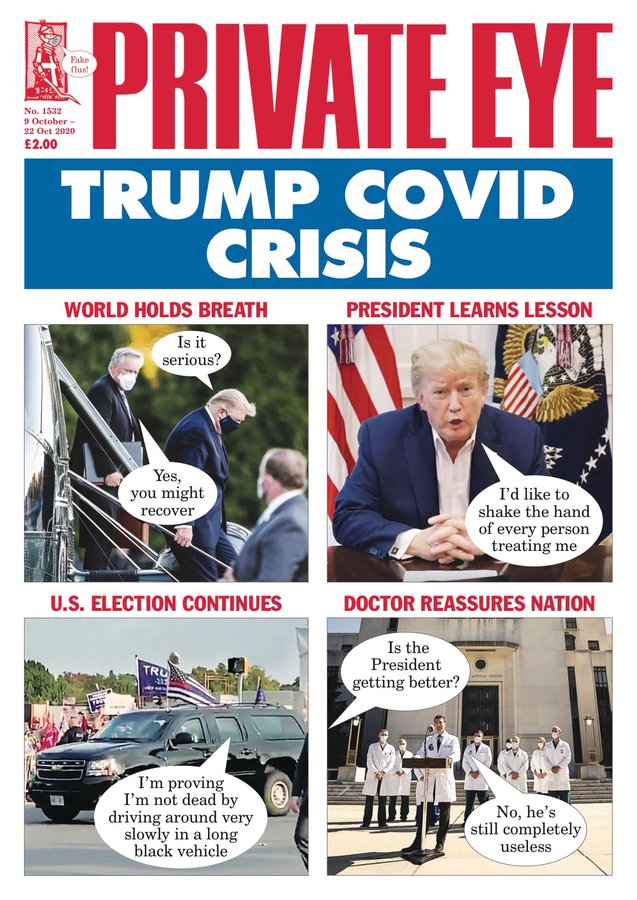 Dr Anthony Fauci, America's most trusted authority on the Coronavirus, confirms that Donald Trump's campaign rallies at the White House have been the source of 'superspreader' events for Covid-19.
A selfish, irresponsible clown or stable genius - America's  voters will have their say on November 3rd.

Top US virus expert Dr Anthony Fauci has criticised the White House for hosting a gathering last month that has been linked to an outbreak of Covid-19.

Dr Fauci, a member of the White House coronavirus task force, said the unveiling of President Donald Trump's nominee to the Supreme Court was a "superspreader event".

At least 11 people who attended the event on 26 September tested positive.

Mr Trump is himself recovering from Covid-19.

His doctors have just cleared him to hold public events, less than a month before he faces Democratic candidate Joe Biden in the presidential election.

Mr Trump has expressed scepticism about measures such as masks and lockdowns to combat the spread of Covid-19, which has killed more than 213,000 people in the US. He has talked up the prospects of a vaccine becoming available, although researchers say this is unlikely to happen before next year at the earliest.

Polling suggests Mr Biden has a single-digit lead over Mr Trump and an ABC News/Ipsos poll found that just 35% of Americans approved of how Mr Trump has handled the crisis.

What did Dr Fauci say?

CBS News asked on Friday what Dr Fauci thought of the White House's reluctance to insist on mask-wearing and social distancing as virus precautions, and instead rely on regular testing.

"The data speak for themselves - we had a superspreader event in the White House, and it was in a situation where people were crowded together and were not wearing masks."

An event at the White House on Saturday 26 September, for the president's nomination of Amy Coney Barrett as a Supreme Court justice, is thought to be the root of the localised outbreak.

As well as President Trump and his wife Melania, those who attended and later tested positive included two senators, the White House press secretary and former Trump counsellor Kellyanne Conway.

Dr Fauci also noted experts have been recommending mask-wearing for the last six months, and condemned talk of a coronavirus "cure" - a word Mr Trump has used in reference to the experimental Covid-19 treatments he received during his recent stay at a military hospital.

Large gatherings are still banned in the US capital due to Covid-19, but federal property like the White House is exempt.

How is Mr Trump's health?

Mr Trump - who was discharged from hospital on Monday after three nights - was asked in an interview with Fox News on Friday evening about the symptoms he had experienced.

The president said he had not felt strong, but had found no problem breathing.

Asked if he had re-tested for coronavirus on Friday, the president said he was at "either the bottom of the scale or free", though he did not say his results were negative.

What events does he have planned?

On Saturday, which according to his doctors will be 10 days since his diagnosis, Mr Trump will give a speech from the White House balcony to a group gathered on the South Lawn.

Hundreds of people have reportedly been invited.

All attendees will be required to wear masks, will be given temperature checks and encouraged to social distance, said the White House.

Mr Trump's remarks will be on the subject of "law and order", according to the White House, which adds that it is a presidential rather than a campaign event.

There will also be an event by the group Blexit, a campaign urging black voters to reject the Democratic party.

On Monday the Trump campaign is planning a big rally in Sanford, Florida.

What about the debates?

The Commission on Presidential Debates said in a statement on Friday that both campaigns had announced "alternate plans for that date".

Mr Trump had baulked at a request from the commission to hold the 15 October showdown virtually to minimise the risk of spreading coronavirus.

The commission said it was still making arrangements for the third and final presidential debate in Nashville, Tennessee, on 22 October.

The Trump campaign said the commission was "biased" towards Mr Biden, while the Democrat's team accused the president of ducking the debate.

Who has tested positive in Mr Trump's circle?

The announcement of Mr Trump's first mass gathering since his infection triggered alarms in Washington, where officials are still attempting to contact trace attendees from the White House event.

Mr Trump tested positive for Covid-19 last Thursday, according to his doctors, but he has not said when his last negative test was.

As many as 34 White House aides and other contacts have tested positive for Covid-19 in recent days, according to US media.

On Friday, the Minnesota Department of Health said nine infections have been tied to Mr Trump's 18 September campaign rally in the state.

At least one person was infectious when they attended, officials say, and two cases have led to hospital admissions, with one of those people in intensive care.