Donald Trump's vile 'pussy-grabbing' comments come back to haunt him!

Donald Trump mocked a woman at a Republican rally over her allegations of sexual assault despite describing Dr Christine Blasey Ford as a 'compelling' witness just days ago.

As the following BBC report makes clear Trump just lied through his teeth and deliberately misrepresented what Dr Ford could remember about the details of her assault.

The man is without doubt the worst person ever to hold the office of President of the United States. 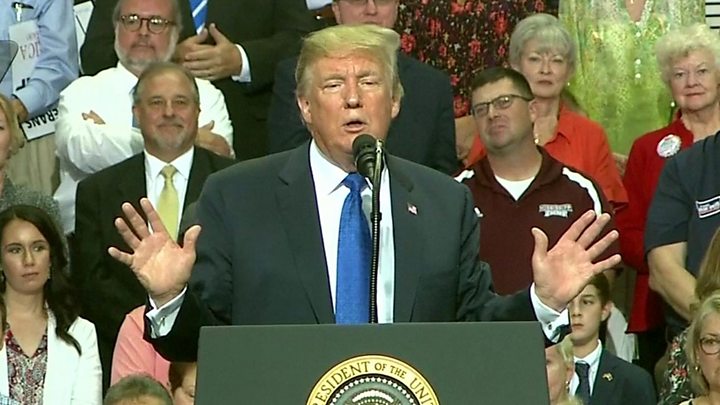 President Donald Trump has mocked the testimony of Christine Blasey Ford against his Supreme Court nominee Brett Kavanaugh at a rally in Mississippi.

"What neighbourhood was it in? I don't know," Mr Trump said. "But I had one beer. That's the only thing I remember. And a man's life is in tatters."

Days earlier he had said Prof Ford was a "credible" and "compelling" witness.

Prof Ford told a Senate committee that Mr Kavanaugh assaulted her as a teenager, an allegation he denies.

Mr Trump ordered the FBI to examine the claims following the Senate testimony. 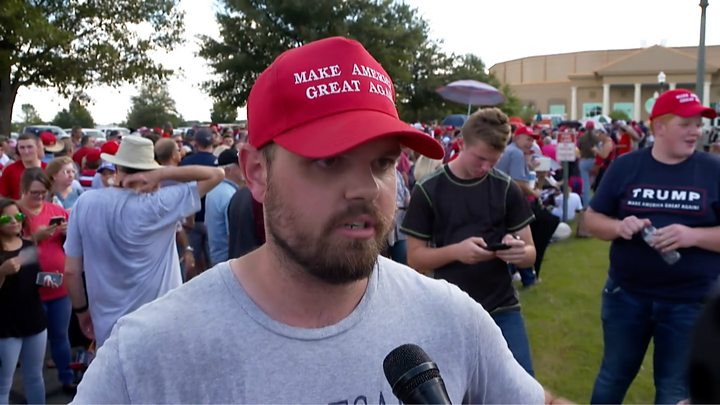 However, Prof Ford's lawyers say the FBI has not yet spoken to her and say it is "inconceivable" that the agency could conduct a thorough investigation without interviewing her.

The FBI investigation is due to be completed by Friday.


What did Mr Trump say?

He told supporters in the town of Southhaven that his political opponents had been "trying to destroy Judge Kavanaugh since the very first second he was announced".

He then mocked Prof Ford's testimony, saying she appeared not to remember basic details about the alleged assault. 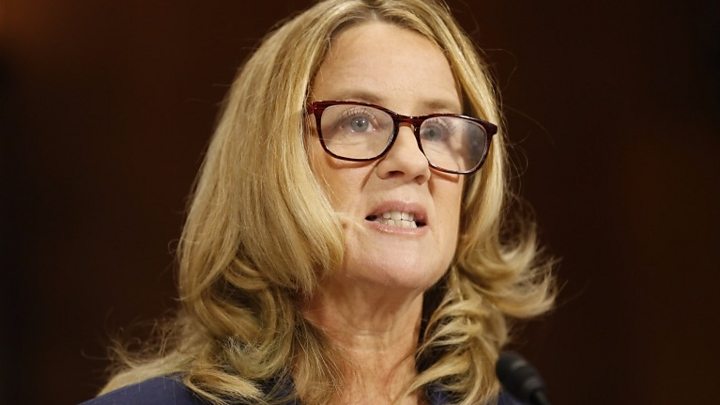 The audience laughed as the president said: "Thirty-six years ago this happened: I had one beer! Well, you think it was…? Nope! It was one beer.

"Where's the house? I don't know! Upstairs, downstairs, where was it? I don't know! But I had one beer. That's the only thing I remember. And a man's life is in tatters."

Shortly after Prof Ford's dramatic testimony to the Senate committee last week, Mr Trump said she was "very compelling" and described her as a "very fine woman".

Earlier on Tuesday Mr Trump reiterated his support for Mr Kavanaugh, saying he believed the Senate would approve the judge.

He told reporters it was a "very scary time for young men in America when you can be guilty of something that you may not be guilty of".

On Wednesday, Republican Senator Jeff Flake - who joined a committee vote in favour of the judge with the caveat of an FBI investigation - called the president's comments mocking Prof Ford "appalling".

"There's no time and no place for remarks like that," he said on NBC's Today show. "To discuss something this sensitive at a political rally is just not right. It's just not right. I wish he hadn't had done it."

Senator Flake is a closely watched swing vote on this issue because Republicans can potentially only afford one defection if they are to confirm their nominee.

"Is it any wonder that she was terrified to come forward, and that other sexual assault survivors are as well?" he added. 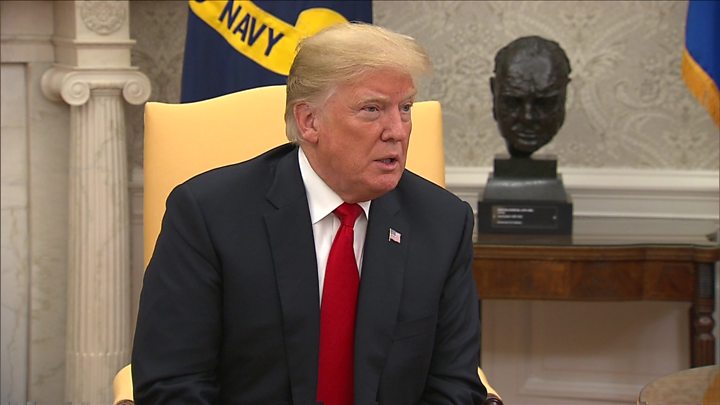 
What does Prof Ford remember?

When she spoke before the Senate committee last Thursday, Prof Ford recalled that the house where the alleged assault took place was in the Chevy Chase-Bethesda area in the wealthy suburbs of Washington DC.

The president seemed to suggest she did not know on what floor of the property the alleged attack had occurred, but Prof Ford told senators she remembered being pushed into a bedroom on the upstairs level.

She testified that it occurred in the summer of 1982. In her initial letter to Senator Dianne Feinstein, she wrote that the assault happened "during high school in the early 1980's".

Arizona prosecutor Rachel Mitchell, who questioned Prof Ford during testimony, said she had told a polygrapher the alleged assault happened in the early 80s, then crossed out the word "early".

Prof Ford did acknowledge in her testimony that she could not provide all the details asked of her - including how she arrived at the party or how she left it and where exactly it took place.

"I don't have all the answers, and I don't remember as much as I would like to," she said. "But the details about that night that bring me here today are ones I will never forget."

Experts have said it is not unusual for victims of trauma to remember certain details vividly but have little recollection of other things that the brain may have accorded less significance to.

Who has the FBI spoken to?

Investigators have spoken to the key witness to the alleged assault on Prof Ford, Mr Kavanaugh's friend Mark Judge. Prof Ford alleges that Mr Judge also took part in the assault at a high school party in 1982.

Mr Judge has denied any memory of the incident.

The agency has also spoken to the Judge Kavanaugh's Yale classmate Deborah Ramirez, who alleges that he exposed his genitals to her during a drinking game at Yale university.

Classmate: Kavanaugh lied about drinking
The truth about false assault accusations
What will the FBI investigation actually do?

Reuters reported that investigators spoke to Ms Ramirez for more than two hours on Sunday and she provided a list of more than 20 possible witnesses.

However, Prof Ford's lawyers say they have had no contact from the FBI despite having tried to get in touch with them.

They said the agency had not responded to the offer to interview Prof Ford, or "a series of emails and letters in which we identified witnesses and evidence that would likely assist the FBI".

At least three other people who knew Mr Kavanaugh from his time at Yale have tried unsuccessfully to contact the FBI about the claims against him, Reuters reported.

A lawyer for a third woman, Julie Swetnick - who alleges Judge Kavanaugh was involved in the drugging and sexual assault of girls at house parties in the 1980s - has questioned why she has not been contacted by the FBI.
Who are Supreme Court nominee's accusers?

The judge has said he did not know Ms Swetnick and that her allegations "never happened".

Senate committee Republicans on Tuesday took the extraordinary step of releasing an explicit letter attacking Ms Swetnick, sent by a man who claims to be a former boyfriend.

Ms Swetnick's lawyer, Michael Avenatti, told the Washington Post the letter was "bogus and outrageous" - a "fabricated" attack to help Republicans "ram through this nomination".

On Sunday, the Senate Republican Communications Center said Ms Swetnick was "not credible at all". 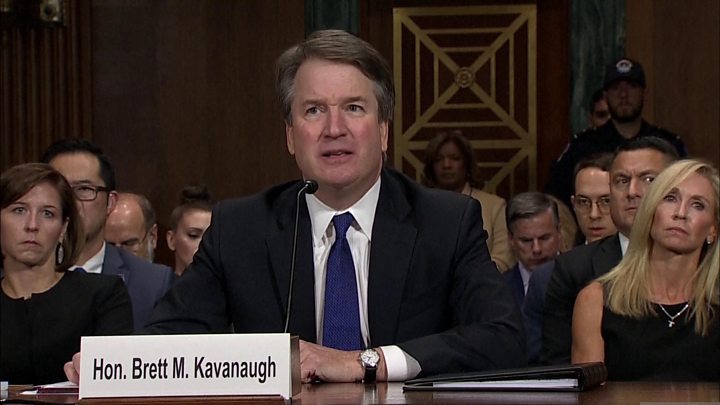 Media caption - Kavanaugh: "The Swetnick thing is a joke"

Some reports have suggested that the FBI could wind up its investigation well before the deadline of this Friday.

Citing unnamed Republican aides, the Wall Street Journal reported that the bureau could finish "as soon as" Wednesday.

What will happen to the FBI report?

The FBI will pass its findings to the White House, which will give them to the Senate. The contents are not expected to be made public.

Senators will then vote on whether to confirm Judge Kavanaugh to the Supreme Court.

The Senate leader has vowed to hold a vote on the nominee this week.

Dianne Feinstein, the top Democrat on the Senate Judiciary Committee, has said Friday would be too soon. She argued that senators needed more time to evaluate the FBI's findings.
Posted by Mark Irvine at 04:12