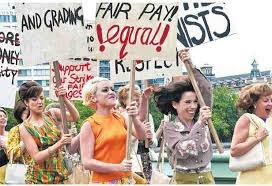 The Claimants' representatives in Glasgow have issued the following joint statement in response to the City Council which says it will not talk to the unions while their campaign of industrial action is underway.

Now I've never heard of anything so ridiculous in my life, but that's par for the course in Glasgow these days.

The Council is complaining that they don't understand what industrial action is designed to achieve, but the trade union demands and the joint statement seem crystal clear to me.

So if Glasgow City Council wants to avoid an historic strike over equal pay, it has two full weeks to get its act together - though it won't get very far by just talking to itself.

UNITY IN ACTION
You will by now have received Annemarie O’Donnell's email pleading with you not to strike.

Apart from the lies and misinformation it seeks to split the united claimant group team. The Band is not ready to split.

So A4ES will not be holding separate talks. The fact is I’m fed up with pointless meetings chaired by Carole Forrest. So I’m on strike too until the council changes its Tune.

So this is the joint statement we have issued.

What do you think?


Statement on behalf of the joint claimants - GMB, Unison, Action 4 Equality and Unite.

The claimant side is a single team and we will not be meeting with the Council separately.

As the Chief Executive of Glasgow City Council you must know that the claims that you have made in your letter and comments to the press - about an agreed negotiated timetable - are not true. Furthermore, your scaremongering about loss of life is at best distasteful, and at worst, dangerous.

Shutting down talks is not a credible response to us raising serious concerns about the process of negotiations and reinforces our belief that Glasgow City Council is still not taking our members and claimants seriously.

Our joint concerns have been raised consistently for over six months and remain unaddressed. Your challenge that our decision to move to strike action is in bad faith is therefore either uninformed or disingenuous.

Your letter once again raises the prospect of a unilateral offer before Christmas which contradicts guarantees we have previously had from the Council Leader. The Council knows that this is a red line for the joint claimant group and we are taken aback that this is once again on the table.

The joint claimant group will be ready on Monday to start meaningful negotiations, otherwise all four parties will meet you again after the strike. At that point we hope Glasgow City Council will be in a position to make meaningful progress.

In order to make the progress necessary to avoid strike action, the joint claimant side require the following:

1) A negotiating team that has the authority and expertise to progress settlement
2) Meaningful negotiations evidenced by a working agreement in the following areas:

3) Settlement based on entitlement not cost
4) Guarantee that claims will not be excluded on pleadings grounds
Posted by Mark Irvine at 11:14