Do Not Resuscitate - Doctors Playing God? 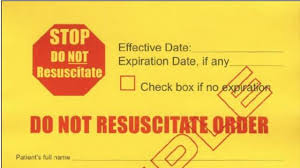 A reader with personal experience of a DNR order being issued to a close family (without the patient or family's knowledge) has been in touch to say that she agrees the practice deserves to be thoroughly investigated.

I just read your blog article and you are right DNR orders during COVID should be thoroughly investigated.

I worry about the poor unfortunate human beings who have no capacity or advocacy.

I would like to know how many DNRs have been issued over the last 4 months.

The ONS (Office for National Statics) says there have been 62,000 excess deaths from Covid-19 and I would like to know what part DNR orders played.

I have edited C's email to me to protect her identity, but I suspect that lots of fellow citizens are outraged at the arrogant behaviour of some doctors - in both care and hospital settings.

So what do the country's politicians and key advisers have to say? 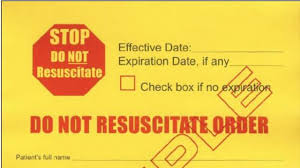 The Scottish Government announced recently that the police would be investigating deaths in Scotland's care homes during the Coronavirus epidemic.

Now that's a good thing if you ask me, but who is investigating the practice of placing 'Do Not Resuscitate' or DNR orders on patients which is reported in the article below from the BBC?

The practice was also highlighted in the BBC Scotland Disclosure programme back in May 2020 which claimed that GPs were routinely issuing DNR orders without consulting patients (care home residents) or their families.

So why does the Scottish Government not widen the scope of Police Scotland investigations to include all DNR orders (which only doctors can issue) in all care and hospital settings - unless there is a properly signed consent form from the patient and/or the patient's family?

Family's shock after do not resuscitate form found in pensioner's bag 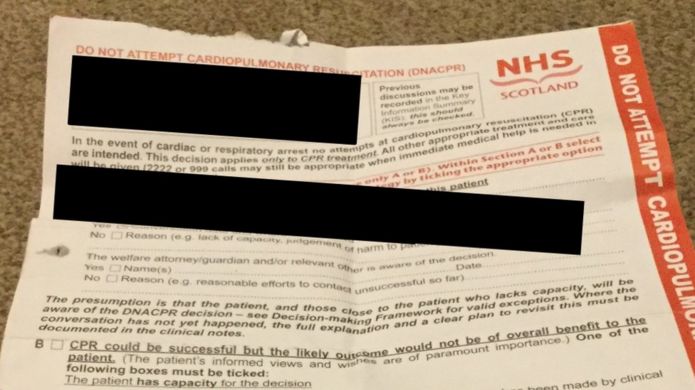 Sitting at the top of Catriona Black's 88-year-old mother's bag after her return from a 12-night stay in hospital was an NHS document - it was headed "Do Not Attempt Cardiopulmonary Resuscitation."

The form, known as a DNR, means health professionals will not use CPR to try to restart the heart and breathing of a patient.

The pensioner's family say she was "disorientated" and "confused", and question if she understood what the form meant.

NHS Tayside has apologised for how the document was found, and is reviewing the circumstances around the DNR.

BBC Scotland understands it has since been revoked. 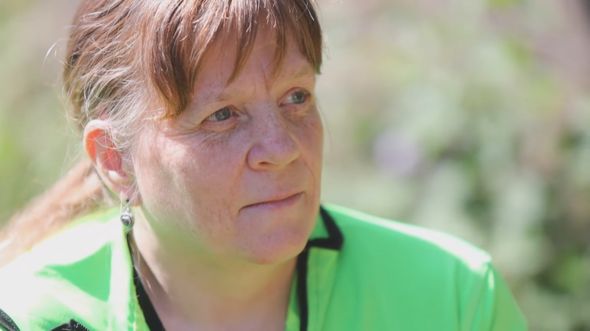 Ms Black's mother went to Dundee's Ninewells Hospital on 7 May after she began to suffer hallucinations after a fall.

The family were not permitted to visit due to coronavirus, but two daughters spoke to their mum on the phone during her stay.

They said staff told them their mother was "confused".

Ms Black said she found the DNR "stuffed in a bag" when her mum was discharged.

She said: "I just got such a shock. It was just overwhelming to discover there was something as major as that and no-one had heard."

Her mother's discharge notes said she was suffering from "ongoing delirium". 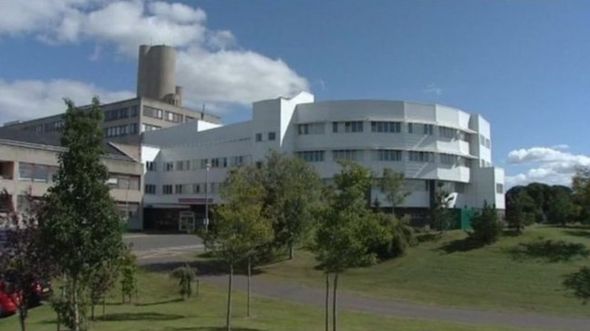 Ms Black said: "I just don't think that was the time or the place (for a DNR) because I don't think she was fully lucid at any point.

"You don't ask somebody a question like that at a moment of weakness and say: 'Tick the box. That's her. She's a DNR'.

"And then never discuss that again with them."

She says the DNR form has been "preying" on her mother's mind, and that she has been "very distressed about it".

What is a DNR form?

A "Do Not Attempt Cardiopulmonary Resuscitation" (DNR) form is kept with a patient's health records. It is used when doctors decide that CPR will not work.

CPR can involve pushing down on someone's chest, using a mask or tube to help them breathe, or using electric shocks to restart the heart.

NHS Scotland guidance says there are scenarios where trying to restart your heart and breathing may do more harm than good, by not allowing you to die naturally.

Doctors make the final decision, but they should listen to a patient's opinion.

NHS guidance states: "You may wish to talk to your family, close friends or carers.

"They may be able to help you make a decision you are happy with."

If you cannot understand information given about a DNR, a "legal proxy" can represent your wishes.

Ms Black's sister has power of attorney for her mother, meaning she has the authority to deal with aspects of her welfare if she is incapacitated. She was never informed of the DNR.

Health Secretary Jeane Freeman told BBC Scotland that "difficult conversations" around DNRs "should always be handled with the utmost compassion, care and tact".

NHS Tayside said it would carry out "an immediate review" into the circumstances of the Do Not Resuscitate order.

A spokesperson for the health board said: "We have spoken with the family and apologised for any distress caused to them from finding the 'Do Not Resuscitate' form amongst her belongings.

"We are very sorry for the upset this has caused and we have offered to meet with the family so that they have the opportunity to discuss their concerns and ask any questions." 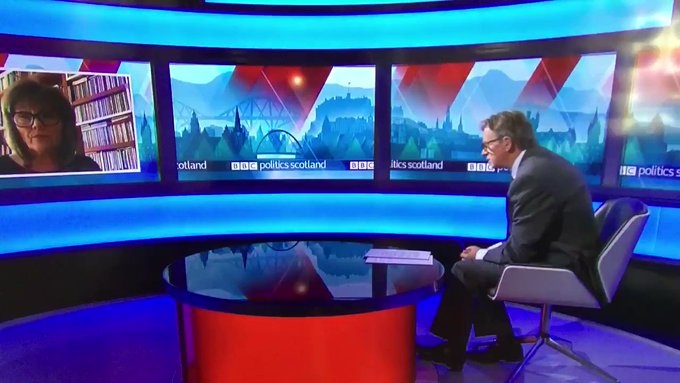 
855 people are talking about this


Incredible though it sounds Scotland's health minister, Jeane Freeman was forced to admit that she had not seen the latest care home guidance issued by the Scottish Government.

Now there is controversy surrounding residential care at the moment with claims that residents have been:
And that's without getting into the problems of PPE and whether 'barrier techniques' in care homes have been of a sufficiently high standard.

So you would think that the Scottish health minister would be familiar with the latest advice being issued by her own government department.

Read a full report in the link below to The Scotsman.