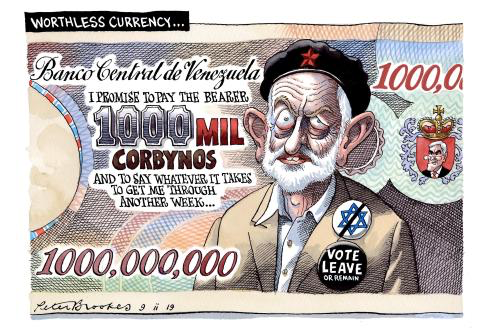 Peter Brookes cartoon in The Times pokes fun at Jeremy Corbyn's continued support for the corrupt, supposedly socialist,  government of Venezuela which has brought this oil-rich country to its knees.

But what I'd like to know is how anyone on the left of politics can explain, far less justify, the fact that Venezuela's wealthiest woman is Maria Gabriela Chávez, daughter of the former president Hugo Chávez, who has amassed an incredible fortune worth $4.2 billion dollars. 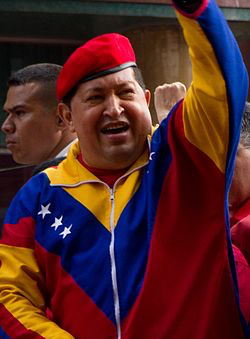 I'm not sure how the supposedly 'socialist' politics of the Venezuelan Government squares with the fact that the richest women in Venezuela is the daughter of the former President Hugo Chávez.

Hugo Chávez appointed his daughter Maria Gabriela as an ambassador to the United Nations and also hand-picked his successor, Nicolas Maduro, Venezuela's current president who has taken to himself the powers of a dictator by locking up political opponents

The Latin Post reports on this strange conundrum  on which there has been little comment from Chávez and Maduro supporters such as the Labour leader Jeremy Corbyn.

The 35-year-old, whom embattled President Nicolás Maduro last year appointed an alternate ambassador to the United Nations, apparently holds most of her assets in accounts in the United States and Andorra, where they are not affected by Venezuela's volatile economy and highly deflationary currency, Diario Las Américas reported.

"(Her) fortune is a far cry from the slogan her father used to use: 'Being rich is back' and is even less compatible with the socialist doctrine that (Hugo) Chávez tried to force on the oil-rich country," Diario Las Américas editorialized.

The assets of businessmen such as Lorenzo Mendoza pale in comparison, the newspaper detailed. Mendoza, the owner of the powerful Polar group, had often been a favorite foe of the late president's, who used to belittle him as "the great oligarch."

During his lifetime, Chávez frequently denounced wealthy individuals, the Daily Mail recalled. "The rich don't work, they're lazy," he said in a speech in 2010. "Every day they go drinking whiskey -- almost every day -- and drugs, cocaine, (and) they travel."

But the socialist leader's daughters seem to have adopted a rather lavish lifestyle. Their refusal to move out of Miraflores Palace, Venezuela's official presidential residence, cost the Venezuelan state $3.6 million a day in 2014, El Comercio noted, based on estimates by opposition congressman Carlos Berrisbeitía. It also meant that Chávez's successor had to remain in the vice presidential residence.

When allegations first surfaced against her last year following a scandal concerning an Argentine rice company, Chavez took to Instagram to comment on the corruption scandal, offering a classic "non-denial denial."

But "they are such basic beings that they do not have any idea about the greatest riches that you have always given me and that you have left me here: your look full of love, your example of greatness and your absolute sacrifice," she added, in apparent reference to her late father.

Anyone looking for confirmation that Venezuelan President, Nicolas Maduro, is nothing more than a political snake-oil salesman should consider his latest crazy antics - his claim, for example, that a 'miraculous' image of Hugo Chavez (his mentor and predecessor) appeared on the wall of an underground construction site.

Now I've posted the 'miraculous' image with this post and have to say that I can't see this as the 'spitting image' of Hugo Chavez - no matter how hard I try.

In fact it looks at best to me like one of those misshapen vegetables that attract publicity from time-to-time as loosely resemble a human face - good for a laugh perhaps, but that's all.

Yet Nicolas is keen on interpreting this as another miracle, a sign that Hugo Chavez is somehow watching over his country and giving his blessing from beyond the grave to the increasingly wacky Maduro administration - which has price inflation running at an astonishing 50%.

Now Nicolas is a 'socialist' politician of course, but he seems more than happy to inject a little voodoo into his pitch to the voters - many of whom are deeply religious.

Which is a load of old bollix, if you ask me - and while you would think that no socialist worth their salt would indulge in this kind of mumbo jumbo, President Maduro appears unabashed.

So, I would not be in the least surprised if he is carted off by men in white coats any day now - or perhaps even the military - because there seems little doubt that the President is losing the plot.

Here's a report on the 'Chavez is everywhere' story from the Telegraph newspaper - which made me laugh out loud.
Hugo Chavez 'appears' on construction site wall

Stories of Chavez appearances draw mockery from the roughly half of Venezuelans who do not support Mr Maduro Photo: Reuters

Venezuelan President Nicolas Maduro said an image of his political idol and predecessor, the late socialist leader Hugo Chavez, had appeared miraculously in the wall of an underground construction site.

Since his death from cancer earlier this year, Chavez has taken on mythical proportions for supporters, and Mr Maduro has spoken of seeing his former mentor's spirit several times, including in the shape of a bird.

In the latest incident, Mr Maduro said Chavez's face briefly appeared to workers building a subway line in Caracas in the middle of the night.

"My hair stands on end just telling you about it," Mr Maduro said on state TV late, showing a photo of a white-plaster wall with marks that appear like eyes and a nose.

"Who is that face? That gaze is the gaze of the fatherland that is everywhere around us, including in inexplicable phenomena," added Mr Maduro, who won an April election to replace Chavez after his 14-year presidency.

Mr Maduro's reverence for Chavez plays well with government supporters, who treat the charismatic former leader's memory with religious adoration. The 50-year-old Maduro, who mixes Catholic beliefs with a penchant for Asian spirituality, has been a devoted personal follower of Chavez since first meeting him at a jail in 1993.

Workers took the photo with a mobile phone during the image's brief appearance, the president added.

"Just as it appeared, so it disappeared. So you see, what you say is right, Chavez is everywhere, we are Chavez, you are Chavez," Mr Maduro said during an event on live TV.

Stories of Chavez appearances draw mockery, however, from the roughly half of Venezuelans who do not support Mr Maduro. Many of them regard him as a buffoon riding on Chavez's image and causing embarrassment for Venezuela's international standing.

Both sides are gearing up for local elections in December that will be a major test of Mr Maduro's standing in the OPEC nation of 29 million people. Rampant violent crime and economic problems are the main issues taxing voters.

The president's first six months in office have been characterized by dozens of accusations ranging from assassination and coup plots to sabotage of the power grid. Critics say that is a smokescreen to cover up domestic problems.