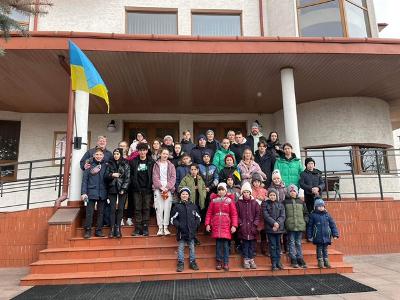 A publicly spirited group of fellow Scots have thrown themselves into doing something practical to help the victims of Russia's war on the people of Ukraine.

The unlikely connection stems from a visit to Ukraine in 2005 by supporters of Hibernian FC who were playing Dnipro FC in the UEFA cup.

During the trip some of the Hibs fans organised a collection for local orphans and a few months later Hibernian supporters adopted the orphanage as an official charity.

The fans built up their links with Dnipro and the orphanage in the years that followed, but the Russian invasion of Ukraine have stepped things up to a whole new level.

In response to the terrible bombing of civilian targets, supporters of the orphanage are evacuating 59 people - 50 children and their 9 carers - via Poland to safety in Scotland.

An inspirational tale and if you'd like to support their work in Scotland and Ukraine, drop a note to Mags McPherson at mags@torsonce.com or Stevie Carr (the group's chairperson) at steven@dnirprokids.com

Or visit the group's web site at - https://dniprokids.com/