“Frankly it’s a very foolish and stupid thing to say. I think my grandfather’s reputation can withstand a publicity-seeking assault from a third-rate, Poundland Lenin.” https://t.co/iJl6ll97tg
— Jim Pickard (@PickardJE) February 14, 2019

Labour's John McDonnell made a complete fool of himself (again) the other day by describing Sir Winston Churchill as a 'villain' who is forever condemned, in the eyes of some at least, for his role in a South Wales miners strike in 1910.

Now I know some of the history of the Tonypandy Riots, but on the credit side Churchill did rise to the occasion during World War Two and without his remarkable leadership the fight against fascism, Hitler and Nazi Germany may well have been lost.

Yet these events count for nothing in Jeremy Corbyn's Labour Party which is run these days by a small, unrepresentative band of self-serving, political ideologues - or 'Third-Rate, Poundland Lenins'.

I'm blocked by John McDonnell on Twitter - otherwise I would happily tell him this myself. 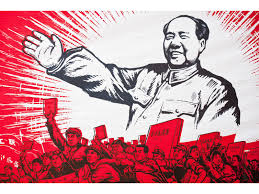 Labour's John McDonnell looks completely out of his depth as shadow chancellor and no more so than yesterday when he made another huge gaff with his Little Red Book routine and bizarre references to Chairman Mao in responding to a government statement on public spending in the House of Commons.

But the voters are not stupid and understand that big issues of state do not lend themselves to schoolboy jokes or this kind of petulant behaviour which, in this case, culminated in John McDonnell throwing his personal copy of the Little Red Book across the dispatch box to his opposite number, George Osborne, who will no doubt enjoy his early Christmas present - as happened with Labour's infamous 'I'm sorry, there is no money left' memo.

McDonnell has since tried to laugh the incident off and apologised for any offence caused, as he is prone to do when caught with his political pants down, but tellingly Labour minders deleted the damaging scenes of the shadow chancellor making a fool of himself in posting the highlights of this important parliamentary occasion on the internet.


I didn't hear Kezia Dugdale deliver her leader's speech to the Scottish Labour conference at the weekend, but I read what she had to say later (see link below) and the following two sections stood out for me like a sore thumb.

"I want to thank our brothers and sisters in the union movement for standing by us, in good times and bad. Your values are our values. We are, and always will be, the party of working people, a proud party of trade unionists."

"In Scotland nearly 350,000 families rely on the money from tax credits. The average family will be more than £100 a month worse off as a result of these changes. 70% of the money saved by this tax rise on working people will come from the pockets of working mothers."

Now back in the year 2000 when the Scottish Government was Labour-led, Jack McConnell (then education minister) signed-off on a new pay deal for Scotland's teachers (the McCrone Agreement) at a cost of £800 million a year.

The McCrone Agreement was fully funded which meant that no specific productivity gains were demanded from the teaching workforce in return for a 23.5% increase in pay in a single year; the agreement having been struck by a triumvirate comprising the Scottish Government, Labour-led COSLA and the teaching trade unions.

A year earlier, the big three public sector trade unions (Unison, GMB and Unite) along with the council employers reached what was hailed at the time as a landmark agreement on equal pay - the 1999 Single Status Agreement which promised a 'new deal' for tens of thousands of low paid women's jobs: carers, cleaners, classroom assistants, clerical and catering workers.

But unlike the McCrone Agreement the 1999 Single Status Agreement was not fully funded and in the years that followed the council employers and the trade unions simply allowed the landmark deal to wither on the vine, even though in the 10 year period between 1997 to 2007 the budgets of councils in Scotland virtually doubled.

What happened, in effect, was that the interests of 70,000 teachers were given a much higher priority than those of over 100,000 of the lowest paid workers in Scottish local government, the great irony being that thew two groups are both council workers and employed by Scotland's 32 local councils.

The cost of implementing the 1999 Single Status Agreement, in full, was put at £450 million a year compared to the £800 million price tag attached to the teachers' McCrone Agreement and the added advantage of the Single Status Agreement was that it would have ended low pay in Scottish local government by raising the lowest hourly rate of pay towards £9.00 an hour - thereby eliminating the need for working family tax credits.

The cost to low paid council workers of not implementing 1999 Agreement amounted to thousands of pounds a year for full-time workers, i.e. much more than the £100 a month refereed to by Kezia Dugdale in the section of her speech about tax credits.

The 'rainbow coalition' collectively responsible for this historic failure to tackle low pay were the Labour-led Scottish Government of the day, Labour-led COSLA, the big Labour-led councils (in Glasgow and Lanarkshire for example), and the Labour-supporting trade unions who failed to stand up for their lowest paid members when the chips were down.

So if that's what's meant by the 'sunshine of socialism', my name's Jeremy Corbyn.
Posted by Mark Irvine at 00:56