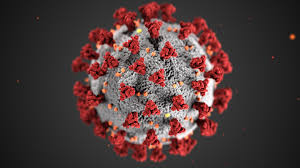 Here's an incredible report from the BBC about a fellow Scot, Stephen Cameron from Motherwell, who survived Covid-19 after falling seriously ill in Vietnam.

Now what I wonder is how Scotland and the rest of the UK,  with our modern public services and our high-tech NHS manage to perform so poorly compared with Vietnam - both in relation to the number of people who have contracted the Coronavirus and those who have died from the effects of Covid-19.

Preferably without banging drums, waving flags or trying to find someone else to blame.


Patient 91: How Vietnam saved a British pilot and kept a clean Covid-19 sheet 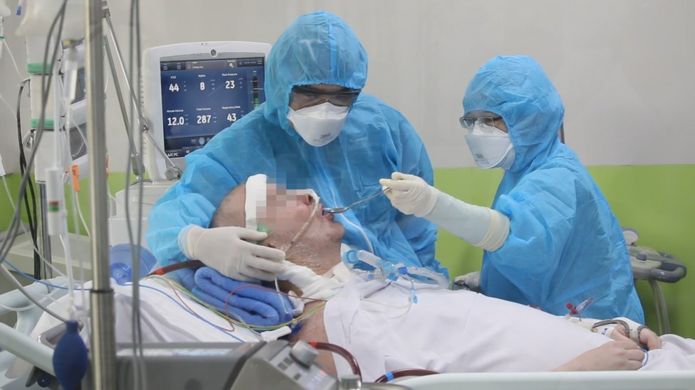 "If I'd been almost anywhere else on the planet, I'd be dead. They would have flicked the switch after 30 days," says Stephen Cameron from his hospital bed.

The 42-year-old Scottish pilot spent 68 days on a ventilator, thought to be a longer stretch of time than any patient in the UK. He did so not in a hospital in his hometown of Motherwell, but in Vietnam's sprawling and hectic Ho Chi Minh City, with no close friends or family for thousands of miles.

Cameron, the last Covid-19 patient in an intensive care unit in Vietnam, has been the sickest doctors have had to deal with during the outbreak.

The country, home to 95 million people, has seen only a few hundred confirmed cases, single-digit ICU admissions and not a single recorded death. So rare was a case of Cameron's severity in Vietnam, every minute detail of his recovery was reported in national newspapers and on TV news bulletins.

He's now known nationwide as Patient 91, the moniker given to him by public health officials when he fell ill in March.

"I'm very humbled by how I've been taken into the hearts of the Vietnamese people," says Cameron, speaking exclusively to the BBC. "And most of all I'm grateful for the bloody-mindedness of the doctors in not wanting me to die on their watch."

"The very small number of critical care patients meant anyone who was severely ill got the attention of all the country's top-level clinicians," explains Dr Kidong Park, the World Health Organization (WHO) representative to Vietnam.
For much of Cameron's two-and-a-half months in a medically induced coma, he depended on an Ecmo machine, a form of life support only used in the most extreme cases, to survive. The machines extract blood from a patient's body and infuse it with oxygen, before pumping it back in.

"I'm lucky that the only lasting effect seems to be that my legs aren't yet strong enough to hold me, but I'm doing physiotherapy twice a day," says Cameron. "At one point, my friend Craig was told by the Foreign Office I had a 10% chance of survival, so he planned for the worst - he gave up my apartment and started doing things somebody would do if I was coming home in a box."

Since he regained consciousness, he describes several tearful phone conversations with friends back home, who "didn't think [he'd] ever come back".

Doctors had to contend with multiple complications while Cameron was in a coma. His blood became extremely sticky leading to clots. His kidneys failed meaning they required dialysis and his lung capacity plummeted to 10%. 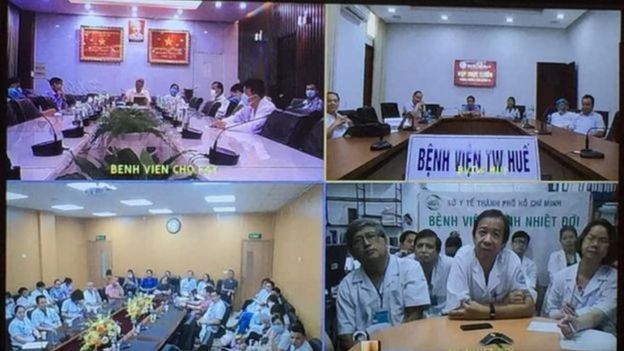 "When it came out in the press here that I needed a lung transplant, apparently loads of people offered their lungs, including a 70-year-old Vietnam war veteran," he smiles. "But it would have been a double lung transplant so that wouldn't have ended well for him."

Despite the outpouring of support from the Vietnamese people and the hundreds of thousands of dollars spent on Stephen Cameron's care, the reaction when he first tested positive for the virus was less welcoming.

Cameron became ill only a few weeks after arriving in Vietnam in early February. Like many Western pilots, he'd headed to Asia to ply his trade for higher pay in the booming regional air travel industry. Two nights before he was due to pilot his first flight for Vietnam Airlines, and the night before most bars and clubs were set to shut in Ho Chi Minh City to contain the virus, he headed to meet a friend in an expat bar in an upmarket district of the city.

At the time, Vietnam had had fewer than 50 confirmed cases but, according to Prof Guy Thwaites, director of the Oxford University Clinical Research Unit based in Ho Chi Minh City and a government advisor on infectious diseases, the population "already had a healthy amount of respect for and fear of the virus".

It was the weekend before St Patrick's Day, so the Buddha Bar and Grill was packed with revellers wearing Irish fancy dress when Cameron arrived just after 22:00. "I don't drink, I largely kept myself to myself in the corner, played a few rounds of pool and went home at around 3.15am," he recalls.

However, when he developed a fever, the day after his maiden flight, and 12 others at the bar tested positive in the days following, sympathy for him among locals was in short supply. The Buddha bar cluster, as it became known in the local press, was the single biggest outbreak of coronavirus in south Vietnam, infecting nearly 20 people both indirectly and directly. 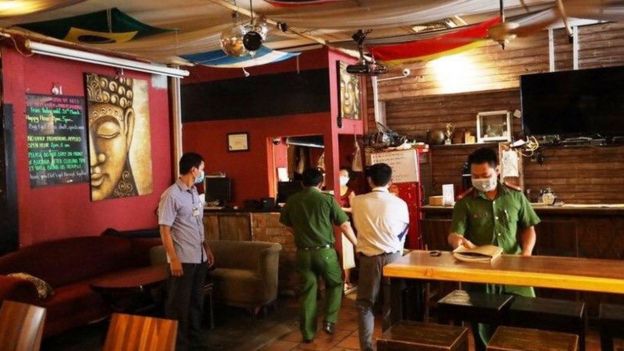 And for some on social media, Cameron, who had criss-crossed the city taking in the sights, was to blame.

Despite there being no proof he was the source of the outbreak, one prominent businessman, Luong Hoai Nam, labelled Patient 91 a "time bomb". He called for foreigners breaking the rules to be deported, earning plaudits from his followers on social media

"There seemed to be a desire to pin it on me coming from abroad, as I did a visa run to Bangkok a week earlier," says Cameron, who's convinced he too was infected at the Buddha bar, and was not the source of the outbreak.

"I was the first person to put my hands up and say: 'Look I don't feel well'. It was inevitable I would be blamed."

On 18 March, Cameron was admitted to hospital after testing positive for the virus, and authorities moved swiftly to shut down the bar and quarantine everyone in his apartment building. In total, 4,000 people linked to the Buddha bar outbreak were tested.

"Patient 91's condition got worse very quickly," recalls Prof Luong Ngoc Khue, who serves on the Vietnamese health ministry's Covid-19 taskforce and advised on Cameron's treatment. "There was a worrying decrease in the function of not just his lungs, but his kidneys, liver and blood flow."

With his condition deteriorating, Cameron remembers taking the bold decision of asking to be ventilated. "I was exhausted as I couldn't sleep and I just thought: 'Oh, put me under and get it sorted'," he says. He was then comatose for weeks and weeks on end, as doctors agonised over his treatment. Meanwhile, the small number of other ICU patients in Vietnam recovered and went home.

All the while, his case gained prominence, with top politicians promising to put every effort into keeping him alive, as the hospital temporarily footed the bill for the spiralling costs of his care.

"There's a lot of political kudos that Vietnam can take from my recovery," he observes, "and it keeps their record, which is pretty phenomenal on Covid, very, very low."

Prof Khue insists everyone - foreign or Vietnamese - had access to good quality care. "We focused on treating sick people at the highest level, both in terms of facilities and human resources, regardless of whether they were Vietnamese or from abroad," he says.

But he gleefully reports that "49 out of 50 foreign patients have recovered and been discharged from hospital".

Waking up was a 'blur'

When Stephen Cameron was first ventilated in early April, there were just over a million cases of coronavirus around the world. When doctors woke him up, on 12 June, there were in excess of seven million. But Vietnam had avoided the worst of the virus. There has not been a recorded case of community transmission since 16 April.

From his recovery bed in a private room in Cho Ray Hospital on the other side of Ho Chi Minh City, where he was transferred after being taken off a ventilator and testing negative for the virus, Cameron is feeling the fallout of several months being motionless and severely ill.

He's lost 20kg (3.1 stone) and his muscles are so wasted it's an effort to swing his leg up even a few inches. He's also suffered from severe fatigue and depressive lows since waking up, in addition to the nagging fear that post-traumatic stress could be just around the corner.

"I've been through a lot mentally. Right now, all I want to do is return home. It's the lack of noise and heat I miss the most. There's such a buzz here from all the scooters' horns and it's monsoon season. Fifteen degrees back home for me is just nice."

'I need to get back to Scotland'

In the past few weeks, he's been visited at his bedside by not just a procession of doctors and nurses, but also high-ranking diplomats, government officials and politicians. Most recently, his hospital room played host to the British consul general and the chairman of Ho Chi Minh City's People's Committee. 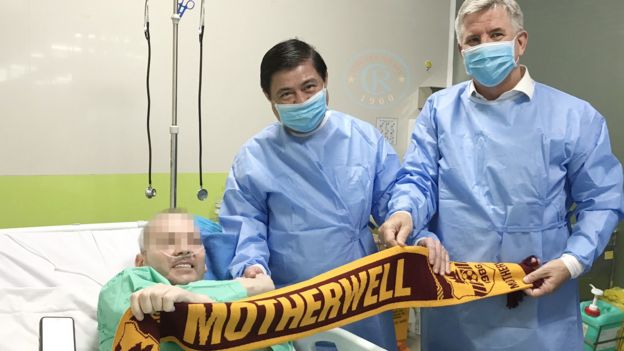 He recalls the mayor promising he'll "be back in England soon", before being swiftly corrected.

There's also a practical side to Cameron's desire to return home as soon as possible. The twice-daily rehab sessions he receives are made more difficult by the language barrier as very few medical staff speak good English. Rehabilitation for the most severely ill patients after ICU is always a delicate dance. Progress and pitfalls are faced in equal measure, and it can be dragged out over several years.

The hospital, in which Cameron is a patient, dates back to Vietnam's French colonial era - it's one of the country's leading medical facilities

"I feel like I'm taking up a bed that somebody who is really ill could take."

The ongoing wrangling over who will cover the costs are causing him stress and diverting attention away from his recovery. At first, the Hospital for Tropical Diseases paid out of its own pocket for his treatment. Then, it seemed the British embassy would intervene. His work insurance eventually covered the cost. But the funds for his stay in Cho Ray Hospital are still up in the air.

"It's become really, really frustrating. At the beginning, I'd send the insurance company an email and they would say: 'Yeh, we'll sort that'. Now, the response is 'We'll deal with this shortly' and nothing seems to happen." 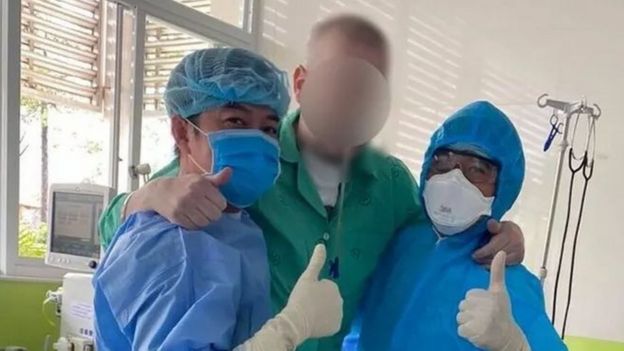 There's a place for Cameron on a Vietnam Airlines flight back to the UK on 12 July. Meanwhile, planes continue to shuttle Vietnamese nationals back from Europe, and having been declared fit to fly a week ago, Cameron is confused why he can't return home sooner.

"As I'm such a well-known public figure here now, everything about my case is controlled by the government."

The politics of his return are a reminder that the miraculous recovery of Patient 91 is not just a story of a Scottish pilot who recovered from Covid-19 and overcame the odds. It is the story of how a developing Southeast Asian country with a turbulent recent history beat the odds too.
Posted by Mark Irvine at 03:32