Reasons to be Cheerful (1) 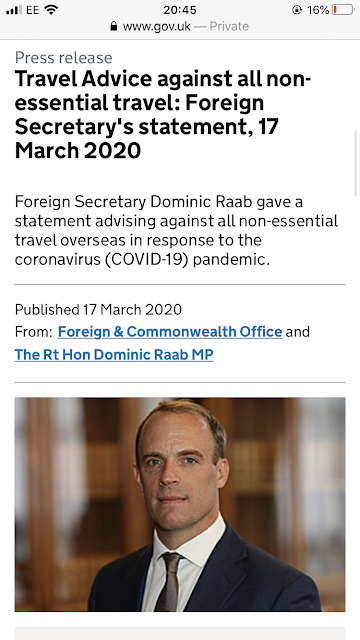 It's good to see that thousands of 'stranded' UK citizens are being helped to return home during the Coronavirus pandemic.

But I think it's also fair to point out that a fair number of these individuals (up to 60,000 apparently) have been irresponsible because the Foreign Office advised against all non-essential travel two weeks ago on 17 March 2020.

So anyone who still set off on holiday after that date, against official advice, has good reason to be cheerful and grateful. 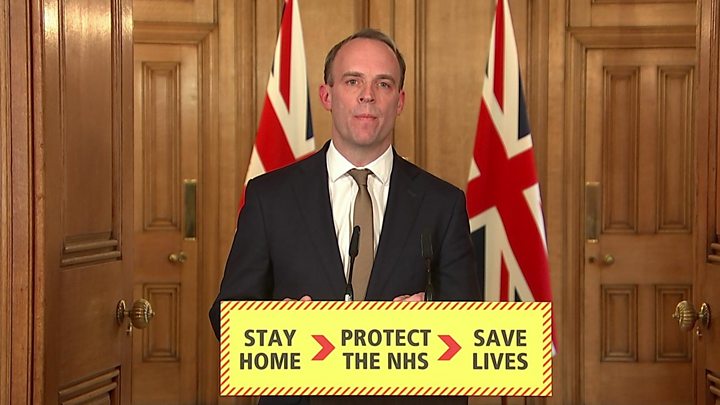 Tens of thousands of Britons stranded abroad by the coronavirus pandemic will be flown home under a new arrangement between the government and airlines.

BA, Virgin and Easyjet are among airlines working with the government to fly Britons back to the UK.

The government has also pledged £75m to charter special flights to bring home UK nationals from countries where commercial flights are unavailable.

The number of people who have died with the virus in the UK has reached 1,408.

Speaking at the government's daily coronavirus briefing, Foreign Secretary Dominic Raab said an "unprecedented" number of UK travellers were trying to get home "from young backpackers to retired couples on cruises".

"We are talking about hundreds of thousands of people travelling around the world," he said.

Under the new arrangement, airlines would be responsible for getting stranded passengers home where commercial routes remain an option.

Where commercial routes do not exist, government financial support will enable special charter flights - operated by the partner airlines and others - to fly to priority countries to bring back UK residents.

Mr Raab said priority would be given to the most vulnerable - including the elderly or those with pressing medical needs - and also to countries where there are large numbers of British tourists trying to return to the UK.

Labour's shadow foreign secretary Emily Thornberry criticised the plans as "just more of the same", and called for "a fresh, comprehensive and fully-funded strategy to bring our British nationals home".

Outlining the partnership, Mr Raab said airlines should offer alternative flights "at little to no cost where routes have been cancelled" and allow passengers to change tickets - including between carriers.

He added: "So for those still in those countries where commercial options are still available: don't wait. Don't run the risk of getting stranded.

"The airlines are standing by to help you - please book your tickets as soon as possible."

Virgin, easyJet, Jet2 and Titan Airways signed a memorandum of understanding relating to the arrangement on Monday, while British Airways has also said it will work with government to get people home.

Other airlines are expected to join the new arrangement, Mr Raab said. 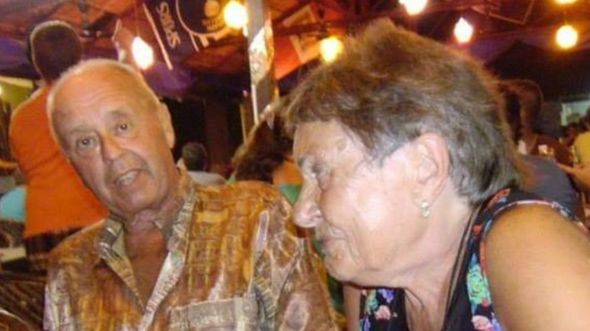 June and Leslie Webb, both 77-years-old with underlying health conditions, are trying to return to Southend, Essex, from Goa, western India.

The couple were due to return to Britain on Monday after a two-and-a-half week trip, but their flight was cancelled after India declared a 21-day lockdown on 24 March.

They have since booked a non-refundable £700 flight for 2 April, which was also cancelled, their daughter-in-law Sally Webb told BBC News.

"My mother-in-law is in remission from cancer and my father-in-law is diabetic," Mrs Webb said. "The situation is getting desperate."

She added that the couple had about a week's worth of medication left and were reporting food shortages where they were staying.

Mrs Webb has been working with her sister-in-law to get them home, but said the government briefing was "the first bit" of information they had received about repatriation efforts.

"It doesn't give us a lot of hope because obviously India is on lockdown," she said.

"The fact is that even if the UK are able to get the Indian government to release the lockdown, they have got to get all of the other Brits as well as our in-laws home.

"We just want a flight, any flight and we want them home safe."

Mrs Webb added that she would like further details about how long it would take to get a flight, "just so I could give my in laws some reassurance".

Speaking to BBC News following the daily briefing, Ms Thornberry said she was "disappointed" that there was not more detail and that some questions "simply hadn't been addressed".

Ms Thornberry added that she had received "worrying" emails from British people around the world about commercial flights, including one family of six who had been told it would cost £61,000 to get them home from Australia to Yorkshire.

Instructions for UK travellers to return home can be found on the government's foreign travel advice website.

The Foreign Office said it has already helped hundreds of thousands of British tourists return from around the globe including 8,500 from Morocco, about 5,000 from Cyprus, and an estimated 150,000 from Spain.

Fresh hope for airlines in crisis?

From the moment countries started closing their borders, it only felt like a matter of time until the government had to step in in a more concrete way to get a vast number of stranded British people home.

Up until now, the Foreign Office has been pressuring countries to lift travel restrictions and co-ordinating with UK airlines that have been running empty planes out to destinations to bring people home.

It was a commercial operation and it worked up until a point.

But with so many people stuck in all corners of the globe, and anger growing among many who found themselves in precarious situations, the government ultimately had to provide funding to ensure a more extensive repatriation programme was possible.

Airlines are in dire financial straits and £75m is, in aviation terms, a relatively small sum. But by helping government now, they'll be hoping government helps them through this crisis and beyond.
Posted by Mark Irvine at 04:04