Trump 'Gets Tough' With China

Stung by criticism over his lack of leadership during the Coronavirus pandemic Donald Trump suddenly decided to 'get tough' with China.

Yet only days ago Trump was sucking up to China and President Xi like nobody's business.

Donald Trump has suspended America's funding of the World Health Organisation because the WHO wasn't tougher on China.

But here's what Trump himself had to say about China only a days ago - boasting of his good relations with President Xi and proclaiming "Much respect" for the Chinese government.

I think its fair to say Trump wouldn't hesitate to throw his Scottish granny 'under the bus' if he thought it was in his own selfish interests.

Coronavirus: US to halt funding to WHO, says Trump 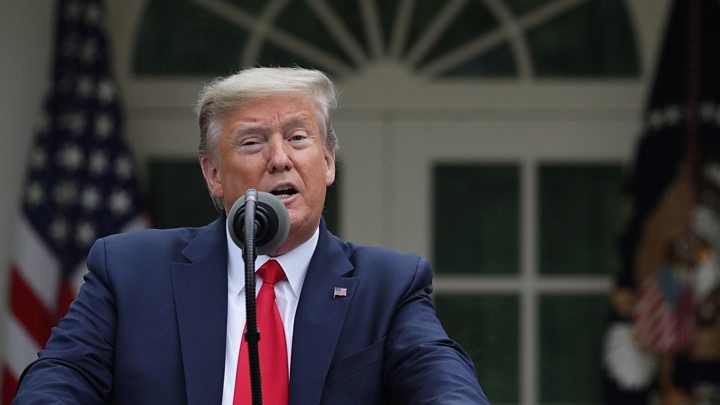 US President Donald Trump has said he is going to halt funding to the World Health Organization (WHO) because it has "failed in its basic duty" in its response to the coronavirus outbreak.

He accused the UN agency of mismanaging and covering up the spread of the virus after it emerged in China, and said it must be held accountable.

In response, the UN's chief said it was "not the time" to cut funds to the WHO.

Mr Trump has been under fire for his own handling of the pandemic.

He has sought to deflect persistent criticism that he acted too slowly to stop the virus's spread by pointing to his decision in late January to place restrictions on travel from China.

He has accused the WHO of having "criticised" that decision and of being biased towards China more generally.

"I am directing my administration to halt funding while a review is conducted to assess the World Health Organization's role in severely mismanaging and covering up the spread of the coronavirus," Mr Trump told a news conference at the White House on Tuesday. 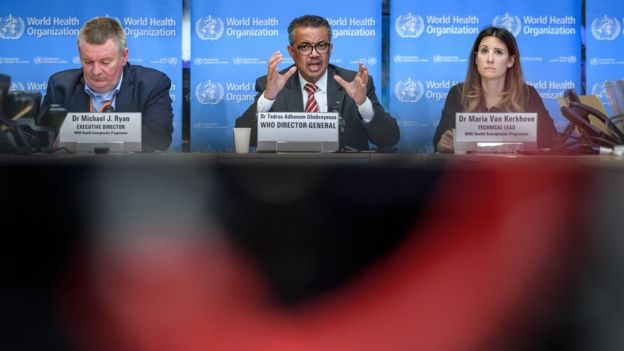 The US is the global health body's largest single funder and gave it more than $400m in 2019.

A decision on whether the US resumes funding will be made after the review, which Mr Trump said would last 60 to 90 days.

The WHO is yet to directly respond but UN Secretary General António Guterres said the international community should be uniting "in solidarity to stop this virus".

"It is my belief that the World Health Organization must be supported, as it is absolutely critical to the world's efforts to win the war against Covid-19," he said.

Germany's foreign minister tweeted that strengthening the "under-funded" WHO was one of the best investments that could be made at this time.

What is the WHO - and who funds it?

The WHO launched an appeal in March for $675m to help fight the coronavirus pandemic and is reported to be planning a fresh appeal for at least $1bn.

Bill Gates, the Microsoft founder and philanthropist, said on Twitter: "Halting funding for the World Health Organization during a world health crisis is as dangerous as it sounds." 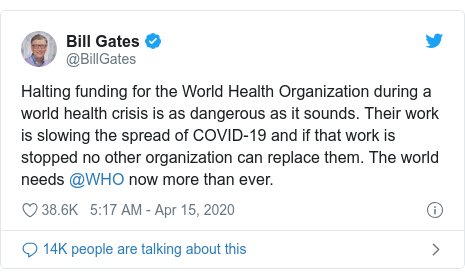 The Bill and Melinda Gates Foundation is the second-largest funder of the WHO.
Posted by Mark Irvine at 00:45