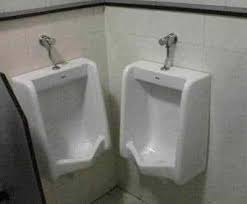 The BBC reports that the £1.35 billion Queensferry Bridge crossing which was supposed to remain open in all weathers has had to be closed this week because of the 'wrong kind' of wind and snow.

Queensferry Crossing could be shut until Wednesday 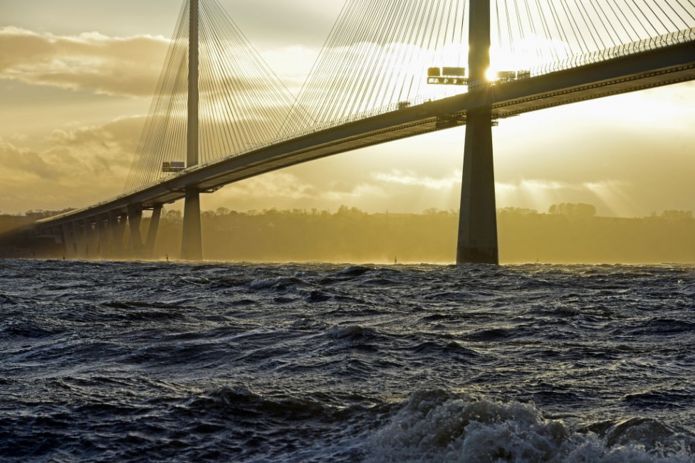 Image copyright - GETTY IMAGES Image caption - The £1.35bn bridge across the Firth of Forth connects Edinburgh and Fife

The Queensferry Crossing is likely to remain closed until at least Wednesday as wintry weather continues to disrupt transport networks in Scotland.

The bridge connecting Edinburgh and Fife was shut on Monday night after accumulations of ice and snow fell from cables on to the carriageway.

Eight vehicles were damaged ahead of the closure on safety grounds.

The £1.35bn bridge, which opened to traffic in 2017, was expected to remain open in all weathers.

It was fitted with 3.5m-high barriers designed to ensure the bridge would not be closed by high winds.

Could a windshield keep bridge open?
Crossing 'more reliable' than Forth bridge

Mark Arndt, of Forth Bridges Unit with Amey, told BBC Radio Scotland's Good Morning Scotland that the closure was caused by a "unique set of weather conditions".

"We had a combination of strong westerly winds... a mixture of snow and sleet that resulted in snow accumulations on the main cables of the Queensferry Crossing," he added.

"At an elevated height, that snow accumulation became chilled.

"It accumulated in a reasonable size and fell to the carriageway. And it was on the grounds of safety that we took the decision to close the bridge." 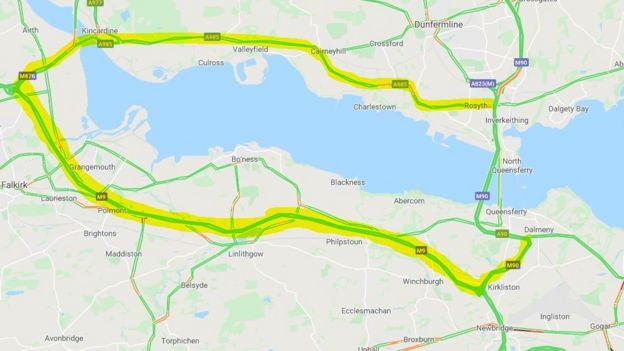 He said up to eight vehicles had been damaged as a result of the ice falls and he was not aware of any major injuries.

Conditions will be constantly monitored throughout the day with a view to opening it as soon as possible, Mr Arndt added.

But he warned it may not reopen until at least Wednesday.

Motorists are being advised to take a 35 mile diversion via the A985, the Kincardine Bridge and the M9.

ScotRail is running extra trains services across the Forth Rail Bridge and there are additional buses over the Forth Road Bridge. 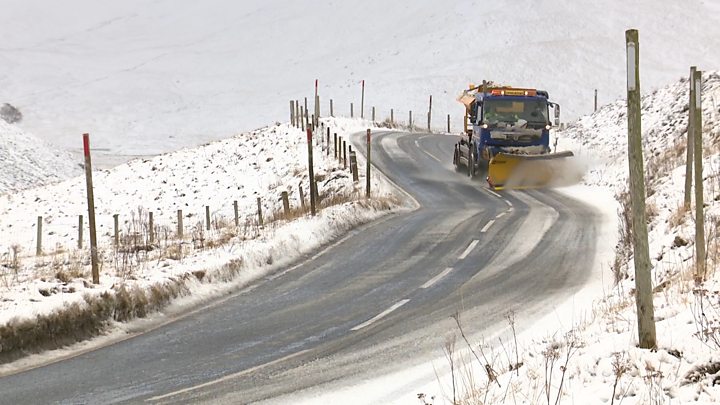 A Met Office yellow weather warning for wind and snow remains in place in Scotland until midnight on Tuesday.

But the wintry weather is set to continue on Wednesday morning, when forecasters are warning of snow and ice.

Rail passengers in the south of the country are also facing disruption after a landslip closed the line between Kilmarnock and Dumfries.

ScotRail said services between Glasgow Central and Carlisle, via Dumfries, were terminating and starting at Kilmarnock.

Replacement buses were being laid on for passengers. 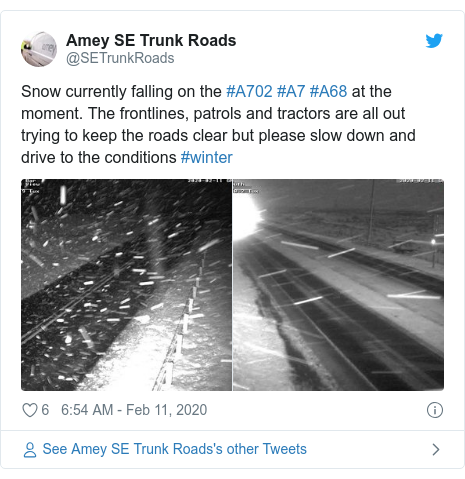 On the roads, there were reports of blizzards on some routes, and the M74 was closed southbound between junction 12 and 13 at Abington due to a road accident.

Images posted on Facebook by police show a lorry had shed its load, blocking all three lanes of the motorway. 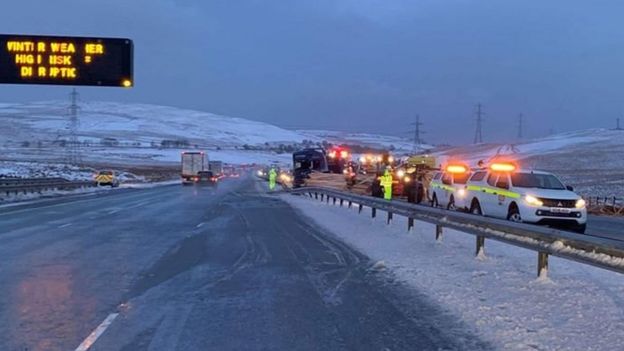 The adverse weather also forced the cancellation of a number of west coast ferry services.

It follows several days of disruption caused by the weather which began with Storm Ciara at the weekend.

During the storm a guest house in Hawick partially collapsed and was washed away in the River Teviot.

And on Monday four ill-equipped climbers were rescued from Ben Nevis in "horrendous conditions"
Posted by Mark Irvine at 02:10