Adam Schiff lays out the case against Donald Trump with a reminder that the Founding Fathers included  impeachment in the American constitution to defend the country and its citizens from presidential corruption.

Rep. Adam Schiff, the chair of the House Intelligence Committee, said the Founding Fathers included the option of impeachment in the Constitution because they were concerned “the president of the U.S. might betray the national security interests of the country for personal interests.” “They put that remedy in the Constitution not because they wanted to willy nilly overturn elections. No because they wanted a powerful anti-corruption mechanism when that corruption came from the highest office in the land,” Schiff said during his closing statements after testimony from Kurt Volker, the former U.S. special envoy to Ukraine, and Tim Morrison, a former White House official who served on the National Security Council. Volker and Morrison testified as part of the impeachment inquiry into Trump, which is seeking answers on whether Trump pressured Ukraine to investigate his political rivals.

For more on who’s who in the Trump impeachment inquiry, read: https://www.pbs.org/newshour/politics...

The words of Alexander Hamilton - one of the Founding fathers of the United States. 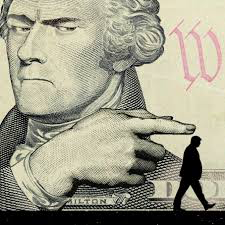