I suppose that coming from a family of Jehovah's Witnesses, Brusthom Ziamani, was already possessed of a predilection to believe in some strange things, but you have to wonder about the nature of his induction into the Islamic faith.

In the sense that he seems to have embraced violence and jihad very soon after becoming a Muslim which presumably means that these hate preachers organise themselves around extremist groups like al-Muhajiroun.

Now I thought al-Muhajiroun had been outlawed in the UK although according to this BBC report some of its members appear still to be active.

I wonder if this includes the preposterous Anjem Choudary and whether this vile little man is still living off the state courtesy of his 'jihadseeker's allowance. 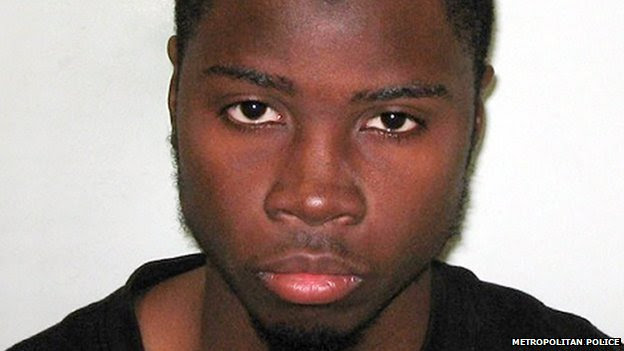 A teenager who planned to behead a British soldier has been jailed for 22 years by a judge at the Old Bailey.

The court heard he was inspired by the murder of Fusilier Lee Rigby and used the internet to research cadet bases.

He converted to Islam in 2014 and became radicalised. Months later he was arrested in east London in a possession of a 12in knife and a hammer.

Ziamani, who was held on 19 August as part of a joint police and MI5 intelligence operation, also had a black "Islamic flag" in his bag.

Police say he visited his former girlfriend earlier that day, when he showed her his weapons and told her he intended to attack and kill soldiers.

The trial heard he told her Michael Adebolajo - one of the men who murdered Fusilier Rigby in Woolwich, south-east London a year earlier - was a "legend".

Judge Timothy Pontius told Ziamani: "A realistic and sensible assessment of the whole of the evidence leads inescapably to the conclusion that this defendant, had he not by sheer good fortune been spotted and stopped by the police on the street in east London, would have carried out the intention he had so graphically expressed to his ex-girlfriend just a few hours before."

He said Ziamani would have to serve at least two-thirds of his sentence before being eligible for parole, adding that he would extend the time he would spend on licence after his release by five years.

The knife police found on Ziamani was shown to the jury

Ziamani was born in London to Congolese parents and went to school in Peckham. His mother worked as a nursery nurse and his father was a psychiatric nurse.

The defendant told the court that his parents, who are Jehovah's Witnesses, had found out he was a Muslim only when they had seen pictures of friends in Islamic clothes on his mobile phone.

During the trial, jurors heard how Ziamani had fallen in with members of the extremist organisation al-Muhajiroun, after he was "kicked out" of his home after converting to Islam.

Police say the group played a "major role in influencing and shaping his radical views" and he attended their demonstrations.

The jury heard Mr Ziamani also put posts on Facebook supporting Sharia law and stating he was "willing to die in the cause of Allah".

It was told Ziamani had been arrested in June last year on an unrelated matter and police found a ripped-up letter to his parents in his jeans pocket, in which he had written about mounting an attack on a British soldier.

In the letter Ziamani stated because he had no means of getting out to Iraq or Syria he would wage war against the British government on UK soil.

He was bailed, but refused to engage with officers from the government's anti-radicalisation programme, Prevent. 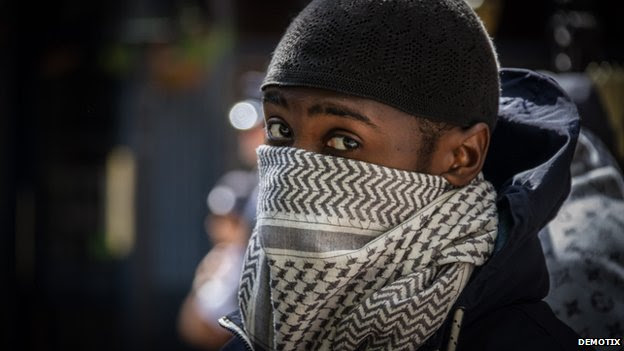 Ziamani's lawyer, Naeem Mian, said his client was not an "entrenched extremist" but a young man who while destitute had been groomed by people who were "more sophisticated and mature" than him.

"It is worrying to say the least that those who groomed him are able to groom and radicalise a young man in such a short period of time," he said.

"On any view it is a tragic case because this young man will spend a long time in custody after which he will inevitably be unemployable. His foolish, naive acts have resulted in him throwing his life away at his tender age. He has nothing to look forward to now."

When Ziamani was convicted last month, Commander Richard Walton of the Counter Terrorism Command described him as an "impressionable young man who became radicalised then rapidly developed an extremist, violent mindset".

After the sentencing, Deb Walsh, deputy head of counter terrorism at the Crown Prosecution Service, said: "This case highlights how violent and extreme views on a page can become credible threats to the lives and safety of British citizens." 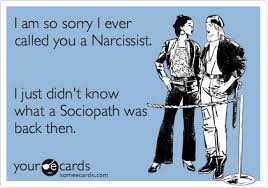 In one sense this deluded 'nutjob' is patently insane given his ridiculous views and beliefs, but as an otherwise functioning human being Brusthom Ziamani he clearly understands right from wrong, as did Anders Breivik and Charles Manson who both went on to commit terrible crimes.

So I hope Ziamani is sent to prison for a very long time and well done to his ex-girlfriend for blowing the whistle and alerting the authorities.

Muslim convert arrested on his way to behead British soldier

By John Simpson - The Times

A teenage Muslim convert who idolised the killers of Fusilier Lee Rigby was arrested in the street on his way to behead a soldier, a jury was told.

Brusthom Ziamani, 19, was arrested in east London with a 12-inch knife, a “pick-style” hammer and a black Islamic flag after researching locations for military barracks and army cadet training centres, the Old Bailey heard today.

Mr Ziamani was arrested hours after showing the weapons to an ex-girlfriend and telling her he planned to emulate his “hero”, Michael Adebolajo, and telling her “me and the brothers are planning a terrorist attack”.

The defendant, from a Christian family, had been arrested and bailed six months earlier after police searching an address found a five-page letter to his parents in which he promised to wage war on the government.

In the letter, shown to the jury, he apologised to his parents for the stress he had previously caused them, he said he hoped to be martyred and wrote: “British soldiers [sic] heads will be removed and burned u cannot deafet the muslims.”

He said that because he could not reach Syria and neighbouring countries he would “wage war against the British government on this soil”. He said he represented ISIB, the Islamic State of Ireland and Britain.

He went on to address Muslims more broadly: “Borthers pick up your swords gins [sic guns] bombs take off there limbs we should do a 9/11 and 7/7 and Woolwich all in one day … don’t try n feel sorry for them this is 2 ALL muslims fight dz people n be a mujahid may Allah give us victory.”

At interview, he told officers that he wanted to join Islamic State fighters in Syria and praised radical preachers such as Anwar al-Awlaki, Abu Hamza and Anjem Choudary.

His Facebook account, under the name Mujahid Karim, variously featured calls for sharia in the UK, calls for others to fight jihad, and antisemitism, including praise for Hitler. In one post he wrote that he was “willing to die in the cause of Allah”.

After his first arrest he was entered into the government’s counterterrorism scheme, Prevent, but his online activity showed that even as he met Prevent engagement officers his Facebook activity was becoming increasingly radical, the trial heard.

On one occasion in June he left a meeting with his Prevent officers and posted an image of machine gun-toting men waving a flag with a quote from the Koran beneath: “Fight them: Allah will punish them by your hands and will disgrace them and give you victory over them.”

Annabel Darlow, for the prosecution, told the jury: “It is the case for the crown that this defendant, in the spring and summer of 2014, began preparing for the commission of an act of terrorism. Mr Ziamani reverted to Islam in the spring of 2014 and very swiftly he became radicalised.

“His hatred of non-believers, his extreme beliefs and interest in violent jihad began to crystallise into a plan to attack a member of the British military forces.

“His idols were two men, who in May 2013, had notoriously murdered Lee Rigby, a young soldier.”

On the day he was arrested he had insisted on visiting an ex-girlfriend in person to tell her his plans, the court heard.

He arrived at her home at 7am and was invited in and told her that the plan was “basically to kill soldiers”, Ms Darlow said.

When his former girlfriend, who cannot be named for legal reasons, asked if the plan was similar to the murder of Lee Rigby, Mr Ziamani told her it was, the barrister added.

The court then heard that after being charged and remanded in custody, Mr Ziamani told a prison officer: “I was on my way to kill a British soldier at an army barracks. I was going to behead the soldier and hold his head in the air so my friend could take a photograph.”

Mr Ziamani denies one count of preparing for a terrorist act in August last year.

The trial continues.
Posted by Mark Irvine at 01:29