Alex Salmond, Jeremy Corbyn and Donald Trump share something in common - fanatical supporters who behave like zealots and believe their heroes can do no wrong.

How shameful for Scotland that the women who made these allegations, deemed credible to be tested in court by Police Scotland and an independent Procurator Fiscal, should now be in need of personal alarms and security advice.


Salmond accusers given alarms after abuse and threats 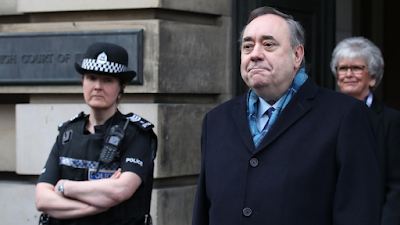 By Kieran Andrews  - The Times

Women who made sexual assault allegations against Alex Salmond have been given personal alarms and offered security advice by the police.

One of the complainants fears for her safety after the former first minister was cleared of all charges.

Since Mr Salmond’s acquittal at the High Court in Edinburgh, those who made allegations about his behaviour have been called liars and there has been open speculation of a conspiracy between the women.

It is understood that officers carried out assessments to ensure the women’s welfare. Some of the complainants were said to have been given personal alarms similar to those provided to MPs after the murder of Jo Cox.

“I worry that some of the commentary in the aftermath of the trial has been damaging, not only for the public discourse, but for our own safety and welfare,” one of the women told Tortoise Media, the online news site.

Mark Hirst, a former SNP candidate who worked for the Russian broadcaster Sputnik and has appeared on The Alex Salmond Show on RT, claimed this week that the women were “going to reap a whirlwind”.

He said that the “precious anonymity” of the nine women “will not be continued” and that “there’s going to be a bit of a reckoning” once the coronavirus pandemic had passed.

A court order issued by the trial judge Lady Dorrian means it is illegal for anyone to publish the identity of the women in the case. Breaching the order could result in imprisonment.

Woman K, a former civil servant and one of the women who originally raised concerns with the Scottish government, said that she had been unable to stop trawling Twitter and Facebook to read the insults written about her and the other women since the allegations became public. Mr Salmond was found not guilty of grabbing her bottom at an event in Stirling.

“It is so hard to see people take the jury’s finding and then say that means we were all conspiring or lying,” she said. “Throughout this whole thing, we’ve not been able to have a voice and now there is no way any of us can counter the terrible things that are being said about us.”

Woman F, who was the other original complainant and who never actively sought criminal charges, said that it was “difficult not to see the verdict as a reflection on yourself”.

“One of the reasons I didn’t want to go [to the police] was the idea of going through an adversarial court process with the first minister, and then having a jury say they didn’t believe you. I found that prospect unbearable,” the woman added.

Mr Salmond has not commented since his statement outside the court after his acquittal, when he said that further evidence would be made public after the coronavirus crisis had passed.
Posted by Mark Irvine at 03:00