“Between 2015 and June of 2018, at least $16.1 million has poured into Trump Organization-managed and branded hotels, golf courses and restaurants from his campaign, Republican organizations and government agencies.” https://t.co/OJDlrujFth
— Tim O'Brien (@TimOBrien) June 22, 2019

Far from 'draining the swamp' the Donald Trump is using the presidency millions of dollars into the Trump organisation.

After campaigning on a platform of 'down with global elites' the BBC reports that Donald Trump has named three of his children and his son-in-law to the transitional team preparing for his inauguration as President of the United States (POTUS).

Who knows where it will all end, but the move stands in stark contrast to Trump's justified criticism of political dynasties in America which have seen the Bush and Clinton families dominating American politics for the past thirty years. 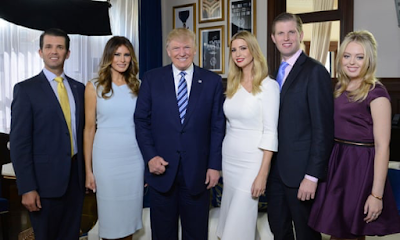 Donald Trump is a terrible blowhard, as everyone knows, and on next week's state visit to the UK the president will be accompanied by his four adult children, as well as his wife Melania.

So much for Trump's pledge about draining the swamp!

Will Hutton has some great turns of phrase in this piece from The Observer in which he pours scorn on Donald Trump's promise to drain the Washington 'swamp' of its vested, all-powerful business interests.

In fact the new President has nominated a cabinet of American millionaires and billionaires, the wealthiest in his country's history, as Hutton says the opposite of what Trump promised as during the election campaign:

"Far from draining the swamp, he is opening the sluicegates; the money men are not so much being hurled out as in full occupation of the economic citadel."

A timely piece and powerfully argued piece, if you ask me.
https://www.theguardian.com/commentisfree/2017/feb/12/not-draining-swamp-trump-money-mens-best-friend

Instead of draining the swamp, Trump has become Wall Street’s best buddy 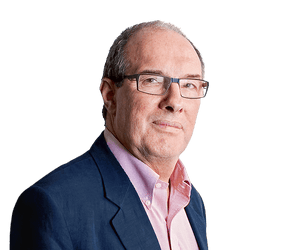 By Will Hutton - The Observer

The president promised a radical overhaul of banking, but is encouraging the money men’s worst excesses 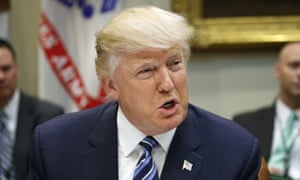 ‘In office, Trump has proved to be a great deal friendlier to the titans of Wall Street and their interests than he suggested he would be as a candidate.’ Photograph: Evan Vucci/AP

President Trump was an accident waiting to happen. The US had entered a zone of fragility: there were too many inequalities, grievances and accompanying disillusion in a system felt not to work .

A chief reason for that economic and social fragility was the behaviour of the American financial system. It is still astounding how close to disaster high finance brought the US and global economy in 2008. It provoked a vast bailout, and the recovery that followed has been one of the most anaemic sort, during which the wages of average Americans have scarcely grown.

The hangover of debt and legacy of banks trying to rebuild their shattered balance sheets has held the economy back. Meanwhile, some of the weak links in the system, like the sheer scale and opacity of the derivative markets, plus business models riddled with conflicts of interest, have remained unaddressed. Fortunes are still being made and very few have paid the price for cataclysmic mistakes.

On the campaign trail, Trump unfailingly tarred Clinton as compromised by, and enmeshed with, Wall Street and its mega banks. Goldman Sachs had “total control” of her; she was in thrall to a “global power structure that is responsible for the economic decisions that have robbed our working class, stripped our country of its wealth and put that money into the pockets of a handful of large corporations and political entities”.
Trump would drain the swamp, he claimed, and reinstate a “21st-century” version of the law separating main street banking from Wall Street – Roosevelt’s Glass-Steagall Act – which was scrapped by President Bill Clinton, in one of his worst decisions. Trump would throw the money men out of the temple, he said. He would reshape finance for the “little guy”. His audiences roared him on.

The BBC reports that America's health secretary, Tom Price, travelled by private jet on official business one afternoon, from Washington DC to Nashville, where he spent less than 90 minutes at two scheduled events - and then had lunch with his son, who lives in the city. 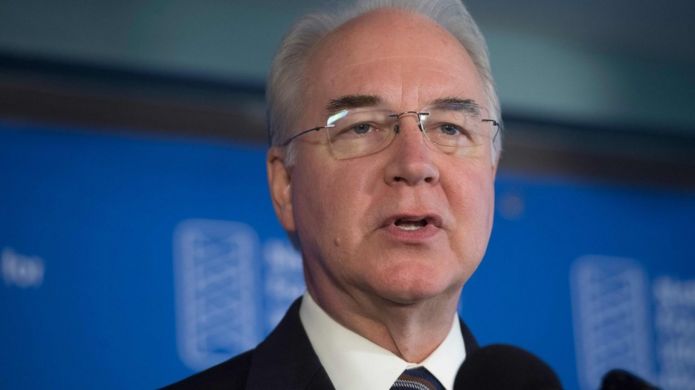 US Health Secretary Tom Price has apologised over his private plane trips on official government business.

The former Georgia congressman said he will reimburse taxpayers and fly commercial in future.

His apology comes a day after US President Donald Trump said he was "not happy" with Mr Price's trips.

Government officials, except those dealing with national security matters, are required to take commercial flights for work-related travel.

"To make sure everyone knows that this will never happen again, I am taking the following steps," said Mr Price in a statement on Thursday.

He said he would continue to co-operate with a review into the matter by his Department of Health and Human Services' (HHS) inspector general.

"I will take no more private charter flights as Secretary of HHS," he added. "No exceptions.

"Today, I will write a personal check to the US Treasury for the expenses of my travel on private charter planes. The taxpayers won't pay a dime for my seat on those planes."

Two other members of Mr Trump's cabinet are under scrutiny by inspectors general for their use of private planes while on the job:
When asked if he would fire the Health and Human Services Secretary over his trips, Mr Trump said on Wednesday: "We'll see."

Mr Price's flights have included travelling from Washington DC to Nashville for the afternoon, where he spent less than 90 minutes at two scheduled events and had lunch with his son, who lives in the Tennessee city.

The Learjet round-trip cost nearly $18,000 of taxpayers' money, according to Politico.

The House Committee on Oversight and Government Reform released a letter on Wednesday asking Mr Price about his use of "government-owned aircraft for personal travel or private non-commercial aircraft for official travel".

The committee gave Mr Price two weeks to hand over the records.
Tesia D Williams, a spokeswoman for the HHS inspector general, told the BBC the agency is reviewing whether it was "potentially inappropriate travel".
Posted by Mark Irvine at 02:20