March for the Future! 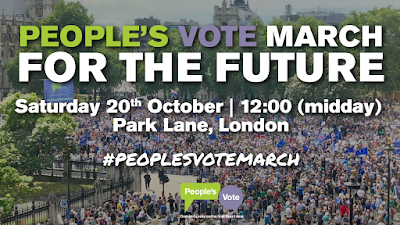 Cross party politics is not dead even though some people would like nothing better.

Tony Blair, Nick Clegg and Michael Heseltine explain why Brexit is a disaster for jobs, security and the UK economy.

"For all the promises made during the referendum, the advocates of leaving the EU both underestimated the fundamental importance of Britain’s integration into the European-wide economy and failed to explain the sacrifices that Brexit inevitably involves."

Read on and hear the case for a People's Vote on Brexit.

Blair, Clegg and Heseltine: We need another EU-Referendum

Quelle: REUTERS/Simon Dawson, Max Mumby/Indigo/Getty Images, Jeff J Mitchell/Getty Images Former British Prime Minister and Deputy Prime Ministers warn of economic price Brexit will cause. The country needs to make a final decision only after knowing "all the relevant facts“, they write in a joint op-ed.

It would be an understatement to say that the negotiations to take Britain out of the European Union have not gone well.

For all the promises made during the referendum, the advocates of leaving the EU both underestimated the fundamental importance of Britain’s integration into the European-wide economy and failed to explain the sacrifices that Brexit inevitably involves.

Leaving the EU means making huge choices between economic security, through membership of the Single Market and the Customs Union, and the ending of shared sovereignty, but the Brexiteers continue to live in a fantasy land of denial. They believe that, sooner or later, the EU will capitulate. The failure of the EU27 to play the role allocated by the Brexit script writers, however, has made the Brexit cheerleaders ever angrier and more and more anxious to find someone else to blame.

Ultimately, though, whether we are willing to pay the economic price to leave the EU is a matter the United Kingdom. Our domestic debate is far from over and, even at this late hour, many of us are continuing to make the case that the British public need to make the final decision once we are in possession of all the relevant facts. So we ask our European partners to be ready to give us the space and time, if necessary, to make such a final decision. Until then, we of course respect their right to act on, and prepare for, the decision of the UK to leave until or unless that changes.

As well as this failure to appreciate the economic costs of leaving, our government has also underestimated the political investment of our European allies in the project of the EU. That failure continues to breed unrealistic hopes in Britain of not just a ‘last minute’ major concession by the EU side in the current negotiations, but of something even more delusional: that once the UK has left and is in the transition period, the 27 remaining member states will capitulate on the principles of the Single Market and give the Britain access to the Market without abiding by its rules.

This is the myth that drives some in the UK to seek a ‘blindfold’ Brexit, in which the UK leaves in March 2019 with a fudge, leaving the terms of our future relationship with the EU vague. Such an outcome should be unthinkable for Britain and would be deeply dangerous to the European Union. For that reason we urge that it be resisted vigorously by all those who care about Europe’s future.

There are two sorts of advocates of a blindfold Brexit in Britain. The naïve optimists and the cynical pessimists. The naïve optimists are those people described above, who believe that once the UK is out, the EU will suddenly decide it is willing to overturn its legal and constitutional order to give us a licence to do what it likes about the customs union, the common commercial policy and product and environmental standards inside an enduring relationship.

The cynical pessimists are different in that they seek the hardest of Brexits and believe it is worth agreeing to a flimsy, non-binding deal that gets them over the line in March 2019, because they know they could simply tear it up as soon as the UK is out. This would provide the pre-text they have always wanted for their programme of extensive labour market deregulation and corporation tax cuts.

For the European Council, the temptation to concede a blindfold Brexit must be strong. Getting the British out of the EU and into the transitional period with the minimum of fuss and disruption might seem like a worthwhile goal, but it will not settle the Brexit question. It is crucial to remember that while a withdrawal agreement will address the Irish border, citizens’ rights and the financial settlement for leaving the EU, a vague political declaration on the future will leave our UK/EU economic relations, and many other issues, unsolved. This would send a dangerous signal to the destructive populists inside the EU and to those who wished Europe ill. The precedent of leaving the EU with no arrangements in place for the future would now be set.

At the same time, such departure terms would also risk prolonging the Brexit process for years to come, further sapping energy and resources from the EU at a time when there is no shortage of challenges to the international trading and security order. So while we understand that the EU27 must act in the interests of their citizens, a blindfold Brexit would not be that.

Meanwhile, in the UK, the demand for a “People’s Vote” on the outcome of the negotiations will continue to grow. The politics of all this in flux and now is not the time to shut down options either for Britain or Europe.

Regardless of what path the UK takes in the coming weeks, there can be no denying that a strong European Union will remain in the UK’s interests. Its ability to bring such a diverse group of states together and bind them under law and in support of human rights, free markets and free trade is a magnificent achievement and one that should never be sold short or under-valued.

As leaders from different political traditions in Britain we have disagreed about much in the past, but what we have in common- our support for democracy, the rule of law, free expression and free trade - are also fundamental European values and they are all worth defending.