I was pleased to read this report from the BBC that the SNP are prepared to changed the party's rules to allow non-members to stand in the May 2015 general election.

Because if you ask me, the best way to secure lasting political change in Scotland is a 'Popular Front' committed to cutting the Westminster Parliament down to size.

In turn that means taking the Labour Party down a peg or two, something that has already happened in the Scottish Parliament and in Scottish council elections where Labour is no longer the largest party.

So Westminster remains the last redoubt where the old Conservative v Labour politics holds sway and I think that Scotland's interests after the next general election would be better served by a Popular Front of 'independent minded' MPs.

As opposed to the present Labour contingent who have shown over equal pay, for example, to have all the backbone of a jellyfish when it comes to standing up for the interests of their local constituents.

Consider for a moment the behaviour of Labour MPs in North Lanarkshire where a fierce fight over equal pay has been raging for the past 10 years. What have any of them had to say to support the position of low paid workers such as Home Carers?

In neighbouring South Lanarkshire Council the same thing happened even while the Labour-run Council was dragged all the way to the UK Supreme Court before being forced to publish details of the huge pay gap between traditional male and female jobs.

And what did all the Labour MPs in South Lanarkshire Council have to say about the scandal?

One of their number, Michael McCann MP, happens to be the former deputy leader of South Lanarkshire Council and he must have known what was going on, yet decided not to stand up and be counted.

So I think it would be great if these Labour MPs were driven out of Westminster and replaced by people who are committed to doing the right thing without fear or favour - and without pulling their punches.

SNP to allow non-members to stand 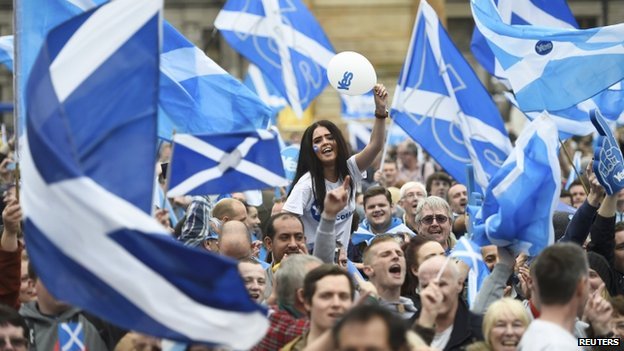 The "Yes" campaign attracted activists from a wide range of organisations

SNP leaders plan to change party rules to allow non-members to stand as candidates in the general election.

The move is designed to appeal to activists who campaigned for a "Yes" vote in the independence referendum.

The plan will be unveiled at the party's conference, which will open in Perth later.

Under the plan, prominent "Yes" campaigners who are not in the SNP would be able to stand for election under the party's overall banner.

In order to do so, they would need to be on an approved list and be adopted by a local constituency.

Party sources have told BBC Scotland that this would harness "the strength and diversity" of the wider "Yes" campaign.

The plan is expected to be adopted by delegates in Perth as Alex Salmond hands over the leadership of the party to his deputy Nicola Sturgeon.

In his keynote speech, Mr Salmond will forecast that Scotland remains on course for independence, despite defeat in the referendum on 18 September,

And he will say of his opponents: "They thought it was all over... well, it isn't now".